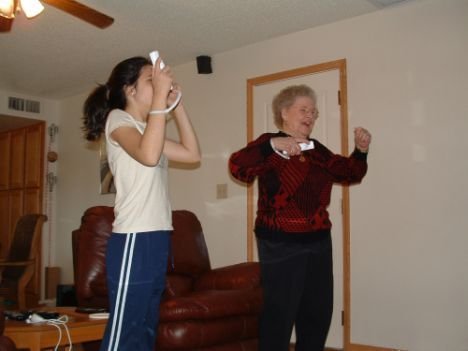 This picture was taken on Christmas Day at my house. In it, you will see my 16-year-old sister (the fat one, on the left) and my 79-year-old grandmother playing Wii Sports together.

Say what you will about the graphics and the lack of decent launch titles, but Nintendo wasn’t yanking your chain when they said that the Wii can win over non-gamers of any age: it’s simplistic, fun, familiar, and instantly accessible.

My 46-year-old mother also asked me for a Wii this Christmas. I wasn’t able to get her one — goddamn console shortages — but still. We’re talking about a 46-year-old mom, asking her KID for a video game system. It should be the other way around! And furthermore, my 59-year-old dad will still play Wii Bowling with my sister and I whenever we ask. And he hasn’t played a video game with me since Duck Hunt when I was four.

Have you had any experiences of Nintendo’s new system actually doing what it’s supposed to do — bring non-gamers together? Hit the comments.