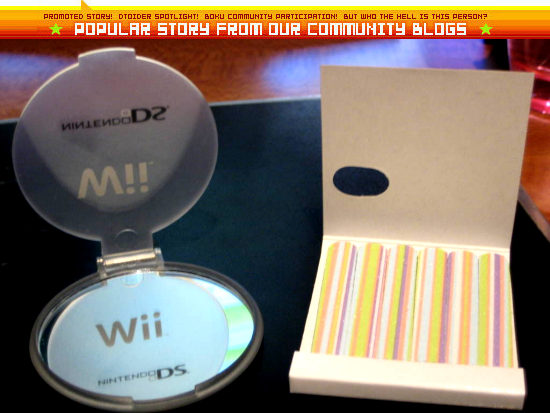 Nintendo has done some great things in their time. It is the one company to have fanboys and fangirls who don’t get ridiculed at every turn, in fact it’s almost okay to be one (hey, just look at Ninjtendo <3). So when I was asked if I wanted to cover a Nintendo event for Destructoid, I was ecstatic. CTZ contacted me knowing that I lived in Australia and wondered if I could cover this event for Destructoid. He sent me a link to the main news page of Nintendo Australia, which had half a page devoted to the event. The event was a modeling competition that Nintendo was sponsoring for Girlfriend and Schwarzkopf.

[Editor’s note: Liz, we love you, thank you for representing Dtoid down under! -Niero]

Now I have to explain something, something anyone from outside of Australia wouldn’t get at first. Girlfriend is a magazine which generally writes articles on sex, PMS, boys, and schoolyard politics. So sufficed to say, this was a strange match to begin with. Nintendo, the most well known gaming company meets Girlfriend, Australia’s young girl’s bible on period pain and puppy love. However, strange combination aside, I traveled out to the shopping center it was being held at with high hopes for Destructoid in my heart and fear of disappointment in my head.

The event was held at Parramatta, a city in Sydney’s Midwest. I arrived with a female friend of mine at around 9:30 to see hundreds of pubescent girls hoping to make their dreams of becoming a model a reality. The first thing I see other than the hundreds of girls wearing too much makeup was Nintendo’s booth. This consisted of around eight pink and white DSes and a Wii set up for everyone to play. I walked around the area as best I could, trying to dodge more and more girls showing up for their chance at fame.

I took photos of the line of girls that every time I thought I had found the end of, noticed security making more room for more girls. I took photos of the host of the event who was supposed to be attractive yet seemed just excessively effeminate. I took photos of everything I could, but the one photo I was hoping to get seemed more and more elusive by the minute. I wanted to take a picture of one of the girls/contestants even slightly interested in the Nintendo booth. The girls at the front of the line were having their hair and makeup done and getting ready to go on stage for their “walk off,” while the girls throughout the rest of the line continued to look at themselves in mirrors and bitch about the girls on stage.

I began speaking to some of the people running the event, hoping to get some more information. They explained that they were expecting a minimum of around a thousand girls to enter and by the looks of things, they meet their expectations. The line seemed never ending; every time I looked, there were more girls arriving, more girls to walk straight past the Nintendo booth set up for them. When asked whether there would be any more involvement of Nintendo in the day’s proceedings, I was told there would be a singing competition.

First prize would be a Nintendo Wii and second prize would be a pink Nintendo DS. I decided to be a little brave and asked why exactly Nintendo was sponsoring an event like this and she explained what I thought she would. Apparently, Nintendo was simply trying to reach another demographic (I love you Nintendo but this doesn’t appear to be working). This isn’t to say they weren’t trying though. The Nintendo reps they had running the booth were well chosen. An attractive guy to lure the girls over and a woman with that pretty, yet non-threatening girl next door look to make them feel more comfortable. The girls just simply were too preoccupied with mastering their blue steel catwalk looks and getting on TV to care about playing videogames.

After taking some more photos, I continued to pay a little more attention to the Nintendo booth. I needed more information on what exactly Nintendo was doing there. So I walked over and introduced myself to the young woman running the booth, explaining why I was taking photos of her while she was showing some young kids how to use the Wii. She seemed excited by it all. She convinced my friend and I to play Wii Bowling. A part of me thought “Hey maybe if they see some girls who don’t work there playing they might get interested.” It didn’t work, but whatever, I had fun. I asked the girl whether there was any more Nintendo stuff going on and she handed me their freebies for the day: a Nintendo pocket mirror and Nintendo nail files.

After a game of Wii Bowling and scoring some freebies, I decided to go straight to the source. I wanted to talk to the girls themselves. I had been told earlier that maybe the girls would go over when they were finished lining up for the day and I wanted to see if this was true. My main questions were: “What do you think about Nintendo sponsoring this competition?” and “Are you going to enter the singing competition to win the Wii or the DS?”

When I asked what they thought about Nintendo, I got quite a few responses consisting of “What the [email protected]#* is Nintendo?” and at best the girls responded with “Umm it’s okay…”. A lot of the girls weren’t even aware there was a singing competition; others still thought I was kidding. They kept thinking I said “wee,” not Wii. I couldn’t really blame them though; I had walked around the whole place and couldn’t find any mention of a singing competition, nor could I find any mention on Nintendo in general other than the booth. However, I did see the Nintendo people wandering around handing out freebies to the girls waiting in line. Nintendo had tried — they tried and failed.

After about three hours, I decided to give up. I saw no record of anyone other than children or random guys playing with the Wii or DS. The booth could have had nothing to do with the competition and apart from the cute girlie freebies, you would have no idea they had ever sponsored the event. I still find it amusing that this was on Nintendo’s main news page for almost a week, yet it seemed so small. I continued to wait for my photo opportunity, but not a single girl looked twice at any of the Nintendo booth that I could see. I have to be honest, a part of me died that day.