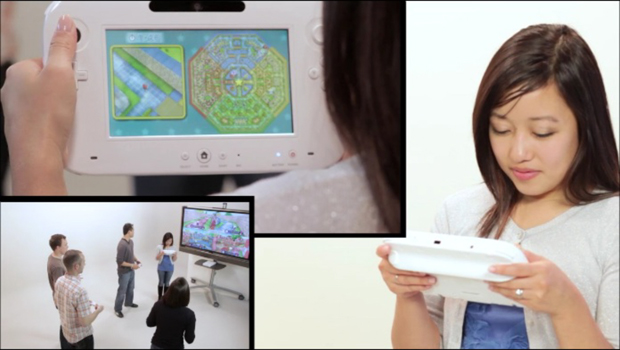 I recently caught up with Kit Ellis of Nintendo of America at the Wii U New York Press event to talk about the forthcoming launch of the console. We shot video of the interview, but sadly, the audio got pretty badly trashed by some mysterious technical failures. Highlights included a “no comment” response on Pikmin 3 supporting off-TV play, a run down of the features of NintendoTVii, and vague hints regarding various features that Nintendo is considering for its upcoming hardware and software releases.

Kit also made an official comment regarding the Wii U GamePad’s status (or lack there of) as a “tablet”. I let Kit know right off the bat that the Wii U GamePad does not fit my definition of a tablet controller for gaming. He didn’t disagree with me on that point, but at the same time, he didn’t do much to reaffirm my assertion either.

I leave it up to you to deduce what Nintendo is trying to tell us here. Grab the full quote from Kit below.

“The Wii U GamePad sort of occupies its own space in that it combines touch controls with more traditional videogame controls. You’ve got the analogue sticks, the d-pad, the multiple buttons, and the motion control, and the touch screen control as well. It’s really its own unique thing, taking all these different forms of input into one device.”

So what do you make of that? Am I just suffering from confirmation bias, or did Kit confirm that the GamePad shouldn’t be defined as a “tablet”? Note that he didn’t use the word tablet once in his response. Is that because he’s avoiding the question, or because the word “tablet” just doesn’t apply to the Wii U GamePad?

With the Wii U launch less than 2 months away, it’s more important than ever for Nintendo to clearly define what people can and cannot expect from their new console. The language they use to define what their console does is a big part of meeting that end. It would be pretty misleading for Nintendo to start calling the Wii U GamePad a tablet as many in the gaming press have done, especially for those of us who define “tablet gaming” as multi-touch control gaming like on the iPad.

That said, it’s not Nintendo’s fault if uniformed consumers see a big touch screen, hear “GamePad” and immediately think “Nintendo made an iPad hooray!” and then snatch the thing up without doing any research. Or is it? Do you think Nintendo should be more direct about explaining exactly what the GamePad is and isn’t capable of, or do you think that they’ve been clear enough about that?