Get your cards ready

[With the Nintendo Switch presentation just hours away, sonic429 has ensured that even if all your dreams don’t come true, you can at least have some fun! Print out your Bingo board and follow along during the presentation to see if you can predict Nintendo’s future! – Wes]

With the pending Switch announcement, I thought I would write a blog so we can have a little fun. I’m sure everyone is familiar with the rules of Bingo, but that won’t exactly work in this situation, so I’m giving everyone a single row, column, or diagonal line. I will also do a basic rundown of each block as some of them require a bit of an explanation. 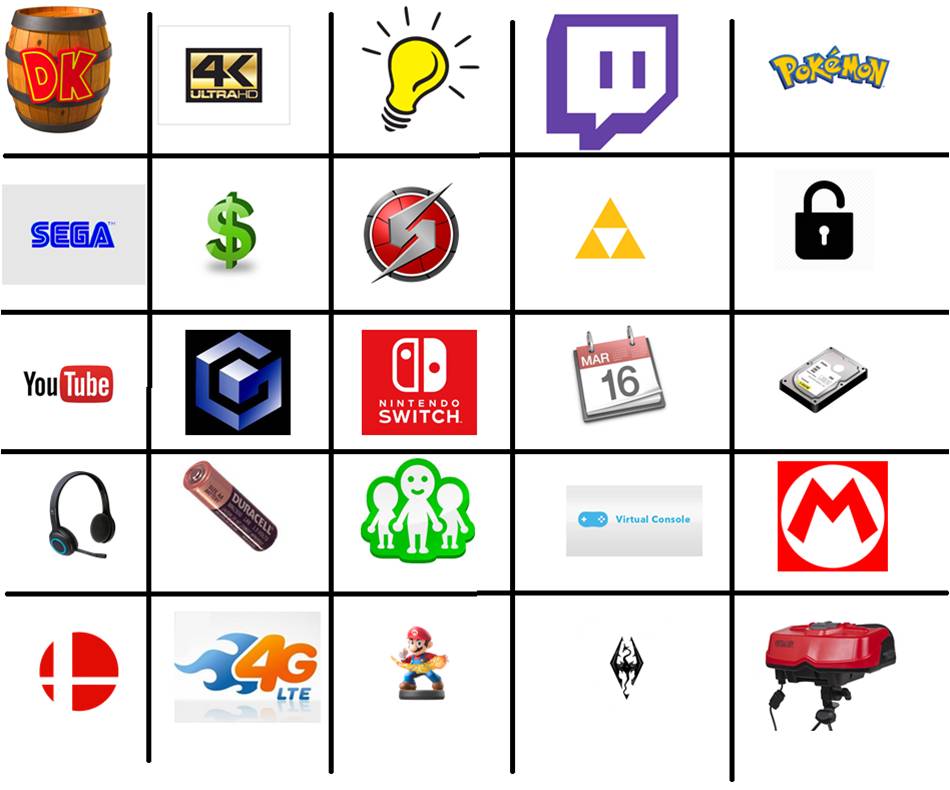 Donkey Kong – The last new Donkey Kong game was Tropical Freeze (2014). The series isn’t on the ropes by any means, but I’m not sure it would be a hard-hitting title that would get the Switch in people’s houses. If a new DK game is announced on the 12th you get the space.

4K – We know for a fact that the Switch won’t have an optical drive, but 4K video streaming isn’t out of the question. Considering it would cost Nintendo basically nothing to implement, it should be a safe bet. But then again, the same could be said about the Wii playing DVD’s yet here we are.

New IP – This is a new IP, plain and simple. I’m feeling generous so it doesn’t even have to be first-party. It does, however, have to be exclusive. Can’t make things too easy.

Twitch Integration – This would be another easy call for Sony or Microsoft, but Nintendo? Not so much. Given its reluctance for people to upload gameplay videos this might be a tough call. I generally advise against this square, but I’ve been wrong before.

Pokémon – We’ve never had much luck getting a mainline Pokémon on the home consoles (unless you count those GameCube games, which I don’t) but considering this is a handheld of sorts, it’s very possible. You only get the square if it’s a direct Pokémon game and no Virtual Console.

Sega – As a company, Sega has always had a fairly decent relationship with Nintendo. You get this square if there is some kind of new Sega announcement. I do have to exclude the new Sonic Generations game as we already know about it, but Sonic Mania is fair game.

Price – This is an interesting pick, as we all have our ideas how much the Switch is going to actually cost. For this square, you have to nail it, no ranges. The only concession I give in this square is if there is more than one bundle (like the Wii U) and one of them is spot on. Hint: $300 range is pretty safe.

Metroid – Ahh the red-headed stepchild of Nintendo IPs. This is a pretty risky square – especially considering that we just got a new Metroid game (kind of). But if you like to live dangerously it is an option.

Zelda – Breath of the Wild is coming to Switch, no doubt about it, so what’s the deal with the square? You have to call if it’s a launch title or not. If not, you have to guess the month it’s coming out to win. Given the rumors there’s not too many possibilities.

Region Locking – This is a pass-fail thing. On one hand, Nintendo has historically implemented it whenever it was logically possible; on the other, it has been open in admitting it’s a stance it is reconsidering. It’s a 50/50 chance either way.

YouTube – Nintendo will obviously have a YouTube app for the Switch, but will it allow you to upload directly from the console? Perhaps you will have to sign your channel up with it in order to enable this feature. Either way, if you pick this square you win.

GameCube Virtual Console – The heavily-rumored feature of the Switch. I would consider this one of the safer bets on the board. If there’s money to be made of re-releasing old content, you better believe they will take it. The only question on my mind is how much work it would be to get these games running 100% accurately, and would it be worth the time?

Release Date – Looking back I realized that Nintendo seems to prefer Sundays as both the Wii U and 3DS came out on that day (in the States). But then again both of those systems had weak launches. Also, it releases games on Fridays. You have to pick the exact date in your region (and name your region).

Storage – The Switch has got to come with internal storage, that much is clear. The question is how much will it come with? It’s the same deal as the price, you have to guess the exact amount, but if one of the bundles is that exact amount you win the square. Hint: Think in multiples of 8.

Voice Chat – Both the Wii U and 3DS support voice chat, but the thing is nobody ever implements it into their games. This is going to be a hard one to call because Nintendo may or may not mention it. I decided to be a little more open for that reason, so if there’s a party chat announced you get the square.

Battery Life – This is a hard call because battery life is usually given in hours, so if your guess is in that range you win the square.

Miiverse – Another obvious feature that the Switch will have. If they announce a new feature directly related to the social network, you win the square. A mostly safe bet if you ask me.

Virtual Console – Since VC support is a no-brainer, I need to add a twist. Will there be an upgrade cost to bringing your Virtual Console games over? I will also accept: Will it have an account system? Pick one question and answer in your comment – otherwise it gets confusing how to award a square.

Mario Game – Yes, we all saw the Mario game previewed at the Switch announcement video. The question is, is it real or just a teaser, and if so, will it make the launch date? If you say no and it’s a teaser you win, but if you say yes you have to get the second question too.

Smash Bros – The rumor mill says that Smash Bros will be a “best of” version of the Wii and 3DS games. Considering we have little more than that to go off of I’m going to make this easier: Will we get this, yes or no?

4G Functionality – Quite possibly the riskiest square in the lot. The idea that you could take your Switch literally anywhere and play online is tantalizing, but Nintendo’s view of online is tragically out of date. Add that to the 3G model of the Vita tanking and the extra cost on both Nintendo and the consumer, and it makes this unlikely. Still, I have to wonder…

Amiibo Support – Given the popularity of amiibo and how easy it would be to implement, this is almost a free space, but it’s not strategically-located. Support does need to be native – no clunky adapters, as if that makes it any harder.

Skyrim – You would think choosing this space would be Fus-Ro-Duh, but Bethesda was quick to waffle when directly asked about the game being on Switch. At the same time, though, it seems rather odd to reveal a console with a game that won’t actually make it to the platform. Yes or no on the confirmation is all I require.

Virtual Reality Support – Sorry if the symbol is misleading, I can’t resist the tongue-in-cheek humor. Basically, will there be support for a virtual reality headset? I’ll even reward the ballsy positive prediction with allowing any-VR-headset compatibility, provided it’s official, and not like a technical workaround like the Oculus.

So, there you have it. Sound off in the spaces you pick. I’d love to hear your explanations. Come back after the event and see how you did. Good luck!

sonic429
Hey, I'm sonic429, just call me sonic. I've been gaming since the 8 bit days, my first system was the Atari 7800. I try to play as many different types of games as possible, but my favorite genres are platformers, adventure, and fighters. I grew up with Nintendo and Sega so they will always be special to me, but I also have love for Sony and Microsoft. Being fair and balanced is always my goal when forming my opinions, and I'm a very opinionated gamer. So if you don't agree with me I have no problems hearing the other side of the argument provided you can back it up. That's the way we all grow in knowledge and gain maturity. But most of all I'm here to have fun and interact with the community. Happy gaming.