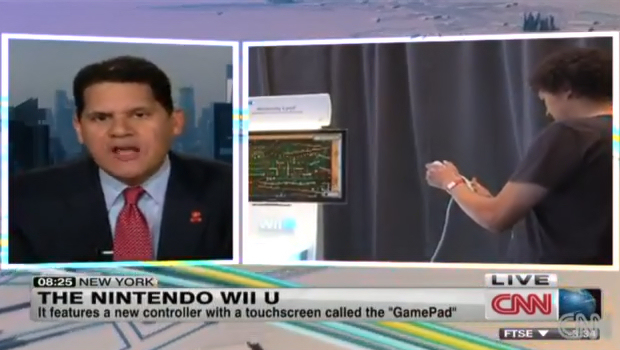 Reggie Fils-Aime took to CNN this weekend to deliver a steaming plate of juicy lies. In a talk with Kristie Lu Stout, the beefy boss of Nintendo of America claimed that the Wii U’s third-party games looked “dramatically” better than versions found on rival consoles.

“The specs are quite different than the competitive systems, much more graphically intensive,” he claimed. “If you do a side-by-side comparison you would actually see that third-party games like Call of Duty look dramatically better on our system.”

The rest of the interview is Reggie hyping up the Wii U and dancing around questions, as you’d expect, and it’s interesting to watch, if only for a less confident Reggie. He seems quite muted and careful — probably because he soon realizes he can’t just “press release” his way through the interview like he could if he were talking to a garmes jarnalizt. Still, that didn’t stop him telling a naughty fib.

I’ve been behind the Wii U since it launched, and I love a lot about it, but the third party efforts have not been a highlight so far. Given how good the first party products look, I’m inclined to think it’s more a result of rushed port jobs than the machine itself, but that doesn’t excuse the meaty executive going on national television and suggesting otherwise.

At best, third-party games have looked on par, and at worst, they’ve suffered from some horrible visual jaggedness and framerate slowdown. Even if the Wii U is capable of better, it’s certainly not been evident with the ports so far, and it’s a little tasteless for Fils-Aime to sit there and boldly make a claim that simply isn’t true.

I expect my corporate mouthpieces to bullshit me with a bit more class than that.