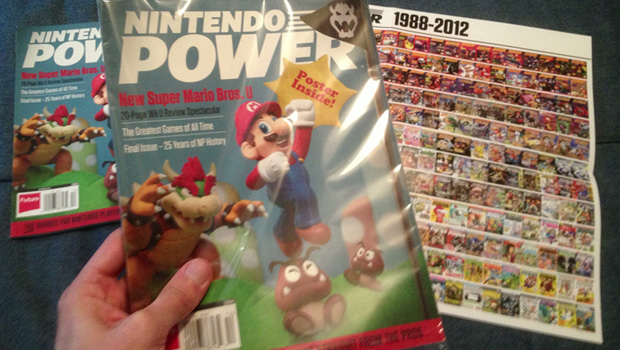 The final issue hits all the right notes

Last night, I noticed that the final issue of Nintendo Power was in stock at Barnes & Noble. Naturally, I bought two copies: one to peruse and one to leave in the shrink wrap FOR. EV. ER.

If you’ve ever been an NP reader or subscriber, you need to pick this baby up. The mag is so chock-full of good feelings and pleasant memories, which makes it all the more painful to read. But as Butters once said, it’s “like a beautiful sadness.”

I want to share a few impressions about issue #285 in the hopes that you’ll run out the door to snag a copy as soon as possible.

You already know about the magazine’s cover, which pays tribute to the cover of the very first issue. Perhaps even cooler than that is the included poster, which features a spread of every single issue plus variant covers stretching all the way back to 1988, bringing the total count to 300.

I can even see the issue that started it all for me: October 1991, with Star Trek on the front. I was a devoted subscriber until early in the GameCube years, when I foolishly dropped it for the more “mature” Game Informer. I even tossed my entire back catalog in the trash because I was running out of room in my closet! I was soooo stupid. I wish I could go back in time 10 years and punch my high school self in the nuts.

The mag is split up into four massive sections: NP‘s top Nintendo games ever, a recap of all 24 years of NP history, farewells from current and past NP editors, and a review blowout for most of the Wii U launch library. And this time around, the letters to the editors don’t only include messages from readers but also from industry faces like WayForward’s Matt Bozon and Sean Velasco, DreamRift’s Peter Ong, and Game|Life’s Chris Kohler, among others.

The top 285 games — one for every issue of the magazine’s run — definitely has some odd placements, especially on the lower rungs. I’m slightly disappointed that the Game Boy got as little representation as it did, but just about all the games you’d expect to make the cut have. These are just the editors’ opinions, after all, and it’s not like you’ll be able to write in your objections.

The biggest draw, of course, is the year-by-year retrospective of Nintendo Power. Seeing the scans from those decades-old issues and reading about all the promotions running at the time really sent me back to my childhood. They even highlight one of my favorite moments: a 1995 contest in which the winner would get to be an extra on the set of The Mask II! Whoever won that contest got royally fucked over! Ha!

Simply seeing the magazine’s progression in an abridged format gives you a true sense of how much effort was put in tailoring Nintendo Power to the fans. From free games for subscribers in the form of Dragon Warrior and The Legend of Zelda: Collector’s Edition to full-on monthly comics for Mario, Zelda, Metroid, Star Fox, and more, it was just an avalanche of goodness.

Editors from throughout NP‘s life chime in with their favorite moments and also a couple of their more shameful ones. For instance, I’m glad that Scott Pelland, managing editor from 1988 to 2008, was able to admit that no one on staff was happy to promote the Virtual Boy but were obligated to anyway. And Steve Thomason, editor-in-chief from 2003 to 2012, asks forgiveness for giving Shadow the Hedgehog an 8.0. It’s cool, Steve. Nobody’s perfect.

If there was one thing about this issue I wasn’t too pleased by, it was the third-party advertisements. One of the things I admired about Nintendo Power back in the early days was that, unlike competing mags, it was relatively ad-free, and the few ads that were there were for Nintendo’s own hardware and software. It wasn’t until this past decade that NP started welcoming outside ads. I had hoped that for this big sendoff, the mag would have eschewed any and all ads. I mean, seriously, what’s the worst that could have happened? The companies pull support and refuse to print anything in Nintendo Power ever again? Pssssh!

The magazine closes with one last surprise: a two-page comic starring Nester and his son Maxwell. Nester was just a spunky kid when he first graced NP alongside “Gamemaster” Howard Phillips. After Nester’s Adventures completed its run, he would return sporadically for high-profile events, such as the mag’s100th issue. We saw him grow up, go to college, and start a family, but throughout it all, he’s still a kid at heart and able to pass that gaming spirit on to his progeny.

It was a fun ride, Nintendo Power. You did alright.