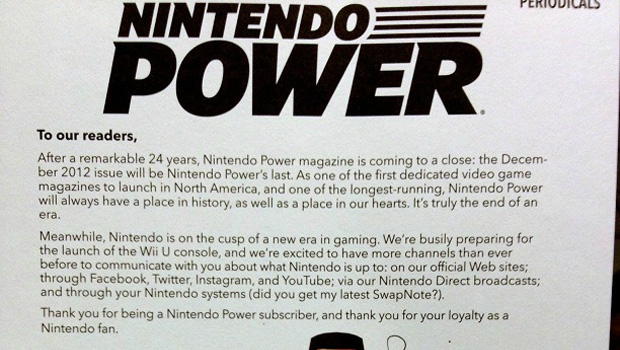 It’s still hard to believe that, after 24 years, Nintendo Power is about to be laid to rest. Even while current and former fans mourn, there are some who are oblivious to the magazine’s fate. To bring those folks up to speed, a special goodbye letter has been been mailed out to all subscribers.

This letter, written by Nintendo of America President Reggie Fils-Aime and Nintendo Power Editor-in-Chief Chris Slate, thanks fans for their loyalty and informs that the magazine will end after the December issue. Reggie also mentions that we can catch Nintendo news from a variety of different outlets, from Facebook to YouTube to special Nintendo Direct broadcasts; while probably not the intention, it does drive home the uselessness of print media in our ultra connected world.

It’s a disheartening reminder that things change. Even if that change is for the better, it still sucks.