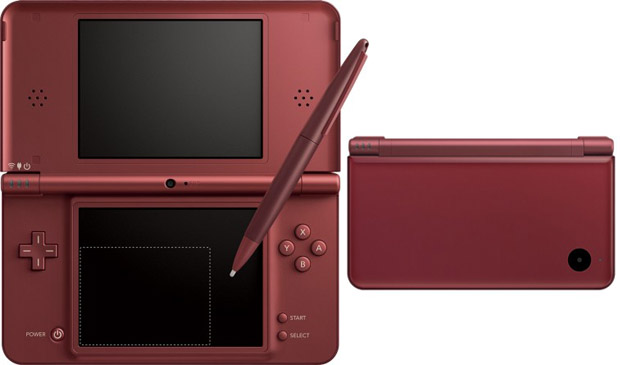 Early adopter burning FTW! Nintendo has announced that, less than a year after the launch of the DSi, a brand new, bigger, better DSi is on the way. We had already heard that a DSi with a bigger screen was coming, but today we have been given the new system’s name, as well as the first images and specs.

The DSi LL will be getting a chunkier stylus, but aside from that, standalone pics of the system don’t make it look any different from your average DSi. However, put it next to an older model and the significant size difference is clear. The DSi LL is ludicrously larger than the DSi.

The DSi LL will launch with three colors — dark brown, wine red, and natural white. Nintendo has confirmed that the new version will be more expensive than the original DSi, due to its size. At least in Japan, the LL will ship with some DSiWare already loaded into the internal memory, but details about international launches are thin on the ground for right now (although a Euro release is confirmed).

If you want more information than you need, the DSi LL is 161×91.4×21.2mm in size and weighs 314g. It also has around two hours of extra battery life compared to the DSi.

So there you are. Sorry if you already bought a DSi, but Nintendo has a better one now. The best part is, if you bought DSiWare games for your original DSi, you can’t upgrade without losing those games. Gotta love Nintendo and its ability to release ten billion versions of one handheld.