One time I was at Disney’s California Adventure, watching the World of Color light/water show. There was a giant Genie from Aladdin screaming “DO YOU LIKE BLUE?!” somewhat too enthusiastically, the excitement on his tongue sounding more like a knife being sharpened. That’s the end of that memory. BUT while we’re on the topic of colors, Miroku129 on NeoGAF spotted Nintendo trying to convince customers that if they liked third-person shooter/platformer Splatoon, then they should give the upcoming sidescrolling adventure Paper Mario: Color Splash a chance. Because they’re both colorful, I guess? 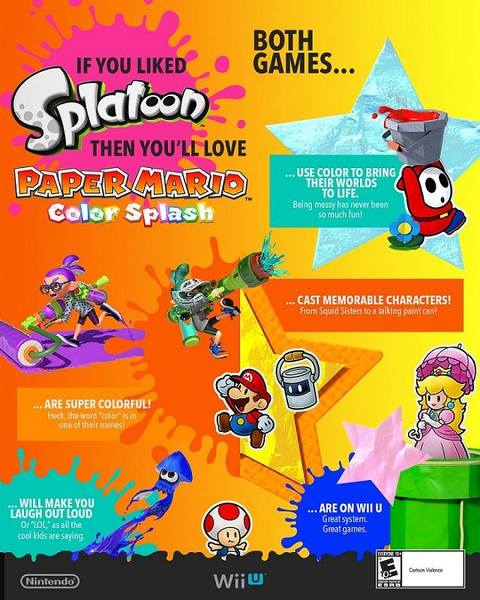 That must be the basis of comparison for these two dissimilar games, because Nintendo makes a point of pointing it out twice. I can’t argue with the memorable characters blurb, because I generally get a kick out of Paper Mario‘s dialogue and scenarios, nor can I deny that both games are on the Wii U (unless the NX is secretly going to be released next week??). All I know for sure is that it’ll also make you “lol,” because this is copy from the early 00s.