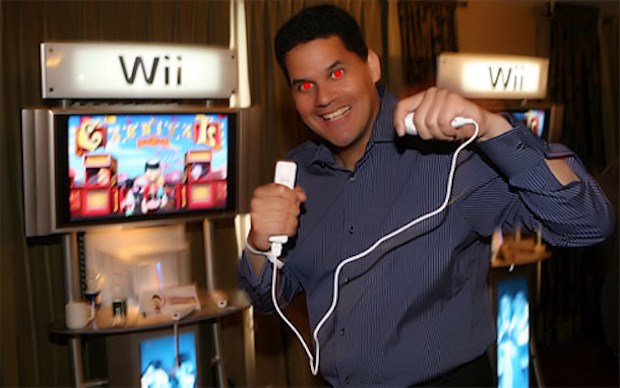 Who can forget Nintendo’s cringeworthy performance at E3 last year? In between Cammie’s embarrassing jokes, Reggie loving that throttle, Ravi Drums doing his best Michael J Fox impression and the cacophonous mess that was the Wii Music demonstration, it left a sour taste. Reggie Fils-Aime has today gotten to the meat of the matter, and hopes that we’ll see a more savory performance this year.

“From Nintendo’s perspective, we always go into E3 with a very high bar wanting to satisfy not only the core fans but also ourselves,” explains the minestrone maestro. “We’re hoping to do a much better job this year. You’ll have to see for yourself.”

We’re a bit worried that Reggie aims to satisfy himself at E3 this year, as I can only envisage him having a luxurious wank on stage in front of the silent, grimacing press, naked and rubbing his chest with his one free hand, sometimes massaging his perineum and grunting loudly the whole time, edging grimly closer to a braying orgasm while Cammie says, “You really love that throttle, Reggie,” and begins to wipe up his knob nectar with crisp dollar bills.

Oh, and Spirt Tracks might get a release date at the show.