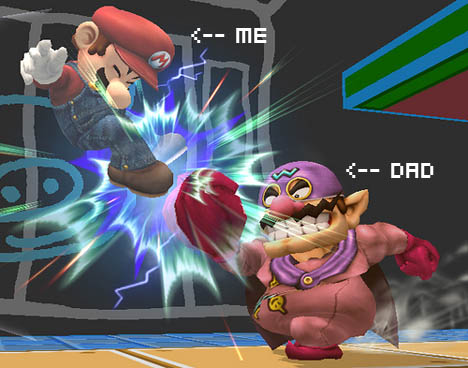 I love my dad. Coolest dad ever. Everything cool I know how to do can be traced back to him, so I could never kick his ass. But, sometimes I think it would be funny to do so. You know, just to say I did. And I’m too old now for him to retaliate.

Nintendo is giving gamers a chance to challenge their dads, or better yet, someone else’s dad. They send word of the upcoming Super Smash Bros. Brawl Wii Father’s Day Tournament, to be held at the Nintendo World Store in Rockefeller Plaza in New York City.

Hip dads and their offspring will battle other teams in a bracket-style showdown in Super Smash Bros. Brawl. The winning team will receive two Wii consoles, two copies of the game, and a trophy. Hopefully this trophy looks a bit better than the last Brawl one.

And, as a souvenir, visitors can also receive father/child framed photos throughout the day. This all goes down Sunday, June 15, between 1 and 4 p.m. Check the press release after the jump for more details.

Do you think you could kick your dad’s ass?

Dads and Kids Team Up at Nintendo World in Rockefeller Plaza

WHAT: Are you ready for this? Mario™ and company are challenging dads and kids of all ages to show off their video gaming skills in the Super Smash Bros.® Brawl Wii Father’s Day Tournament at the Nintendo World store in Rockefeller Plaza in New York City.

Teams of dads and kids will compete against each other in this action-packed fighting game, which features a multitude of Nintendo characters, from Mario to Link™ to Pikachu®…and even Solid Snake and Sonic The Hedgehog. The winning team of the bracket-style playoff will receive two Wii consoles, two copies of the game, a trophy and of course, all-important bragging rights.

Super Smash Bros. Brawl delivers a knockout punch with new characters, new moves and multiplayer battles via Nintendo® Wi-Fi connection. Gamers everywhere have been having fun exploring the endless options in the game.

Copies of Super Smash Bros. Brawl will be available for purchase at Nintendo World. Attendees can also receive father/child framed photos throughout the day.

WHO: Parents, kids and video game fans of all ages