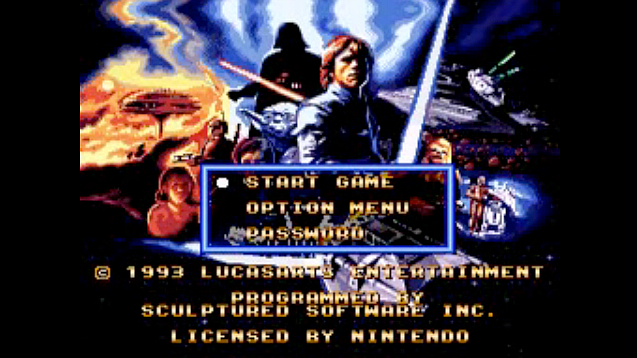 Prepare for a thrilling week on the Nintendo downloadable front, folks.

Look forward to going backward with Super Empire Strikes Back. Releasing soon on the Virtual Console, the Super NES port puts you in the shoes of various infamous rebels including Luke Skywalker and the ever-entertaining Chewbacca. Priced at 800 Wii Banana Points, it’s sure to, uh, titillate some nerd out there.

Mr. Driller is striking back as well. This week’s WiiWare title is Mr. Driller W, an “updated” version of the Namco-developed puzzle game. It debuts at 800 Wii Space Bucks as well.

On the DSiWare front, owners will be happy to find an actual game — not a clock — as their downloadable goodie for the week. The forthcoming title is called Pop+ Solo and is described as an “awesome puzzle/shooter” boasting tons of modes. I haven’t the slightest idea what this thing is from the official release, so I’ll just include that below the fold.

As usual, all of these titles will be available at 9 AM Pacific today.

Super Empire Strikes Back
Original platform: Super NES
Publisher: LucasArts
Players: 1
ESRB Rating: E (Everyone) – Fantasy Violence
Price: 800 Wii Points
Description: Pursued across the galaxy, Rebel forces now marshal new strength on the remote ice world of Hoth. Though tracked by probe droids, attacked by ice monsters and confronted by an army of gigantic Imperial Walkers, you must not give in. You are the Alliance’s only hope. Learn the ways of the Force, then test your skills in this fast-paced, action-packed sequel to the hit game Super Star Wars.

Pop+ Solo
Publisher: Nnooo
Players: 1
ESRB Rating: E (Everyone)
Price: 500 Nintendo DSi Points™
Description: Pop bubbles, build chains and try to keep the timer alive in this awesome puzzle/shooter. Pop your way through 16 waves of bubbles in Adventure, Normal or Advanced modes. Race against the clock in a one-, two- or five-minute run. Try the new Bonus Round mode, where each bonus round can be played in three, five or 10 rounds of increasing difficulty. Or just chill out in the relaxing Chill mode with no score or time pressures to worry about. Pop+ Solo comes to the Nintendo DSi™ system with eight modes and five bonus rounds, plus plenty of new badges to collect. Adventure mode introduces some new elements to the game with mines, golden fish, jets of water and four boss battles. The new Challenge mode lets you create and customize your own challenges to play again and again.