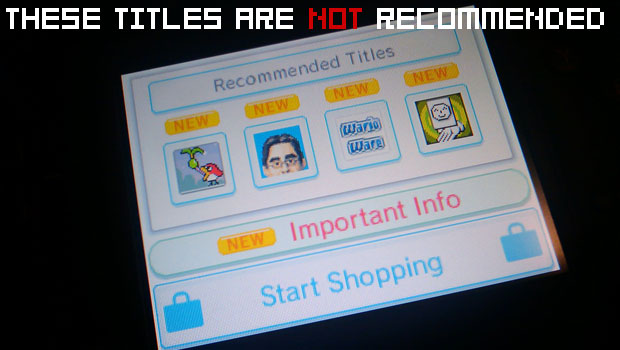 If you purchased a DSi like I did, you automatically received 1,000 free Nintendo points to do as you please in the DSiWare store. My suggestion? Buy Art Style: AQUIA and buy it now. Save your remaining 500 points for something more substantial than the other offerings currently available… they’re coming.

Nintendo hasn’t forgotten about the Wii, either. Today’s WiiWare title is EQUILIBRIO (DK-GAMES, 1-4 players, 500 Wii Points), a platform/puzzle game that has you rolling a ball around with the Wii Remote or Wii Balance Board. The virtual console gets Koei’s pirate simulator, Uncharted Waters: New Horizons (Super NES™, 1 player, 800 Wii Points).

Allow me to repeat myself — if you bought a DSi, do yourself a favor and spend some of your free points on Art Style: AQUIA. You won’t regret. But are there any DSiWare games you’ve already purchased that you do regret?

This week marks the launch of Nintendo DSi™, the third iteration of the nation’s top-selling portable video game system. Along with it comes the grand opening of the Nintendo DSi Shop, an online store where players can redeem Nintendo DSi Points™ for a wide variety of games and applications, including Nintendo DSiWare™ titles. Just as the WiiWare™ service does for Wii™ owners, the Nintendo DSiWare service delivers an ever-growing library of cool new downloadable content for Nintendo DSi users, with new games added on Mondays.

For this first edition of Nintendo Download, we’re pleased to highlight the latest additions to both the Nintendo DSi Shop and the Wii Shop Channel. You’ll find six Nintendo DSiWare titles to choose from, including a free Web browser that lets Nintendo DSi owners access the Internet with a swipe of the stylus. Wii users, meanwhile, will see a fun new WiiWare game that’s compatible with the Wii Balance Board™ (sold separately with Wii Fit™), plus a classic exploration game for the Virtual Console™.

Nintendo DSi Browser (Nintendo, 1 player, 0 Nintendo DSi Points): Get on the Web with ease using the Nintendo DSi Browser. Powered by Opera, this simple-to-use Web browser is made specifically for the Nintendo DSi system, providing a seamless and intuitive browsing experience that makes the most of the system’s touch controls and two-screen interface. Check e-mail, get the latest news updates and more – wherever a wireless Internet connection is available. Just grab your stylus and start surfing.

Bird & Beans™ (Nintendo, 1 player, Rated E for Everyone, 200 Nintendo DSi Points): In Bird & Beans, you control Pyoro, a small bird with an elastic tongue and an insatiable appetite for beans. Scramble to catch beans that fall from the sky, racking up points as you go. The farther away the bean, the more points it’s worth. Beware any beans that are missed – they’ll leave a hole in the ground that can’t be crossed, potentially trapping Pyoro. Bird & Beans also features a second version that enables Pyoro to spit seeds at high speed, bringing down more beans than ever before. This fun and fast-paced game requires skill and strategy to master, and always leaves you wanting to play just one more time.

Art Style™: AQUIA™ (Nintendo, 1 player, Rated E for Everyone, 500 Nintendo DSi Points): Dive into Art Style: AQUIA, a fast-paced underwater puzzle game that asks you to think fast and move even faster. Help a scuba diver reach the ocean’s floor by matching three or more colored blocks horizontally or vertically. The more blocks you match, the faster the diver will descend. Fail to clear blocks and the diver’s air supply will start to run out, causing darkness to creep in from above and cloud your vision. Race against time in TIMED DIVE, dive deep in FREE DIVE mode or visit the AQUARIUM to view various sea creatures. Like every game in the Art Style series, AQUIA features elegant design, polished graphics and pick-up-and-play controls, creating an experience that focuses purely on fun and engaging game play.

WarioWare™: Snapped! (Nintendo, 1-2 players, Rated E for Everyone – Comic Mischief, 500 Nintendo DSi Points): Wario™ returns with more manic action made especially for the Nintendo DSi system. WarioWare: Snapped! uses the built-in Nintendo DSi Camera to make players the star of the show by placing them right into fast-paced mini-games. Take part in wacky challenges simply by moving your face and body as you travel along four wild roller coasters, hosted by Wario and his pals. Beat the mini-games using motions ranging from large to small, or play with a friend for even more fun. Wario even has a few tricks up his sleeve.

Brain Age™ Express: Math (Nintendo, 1 player, Rated E for Everyone, 800 Nintendo DSi Points): In this math-focused edition of the popular Brain Age series, players can enjoy a mix of new and familiar exercises, including Change Maker, Triangle Math, Sum Totaled and Multi Tasker. A new Themes mode includes drawing, photography and voice acting challenges, letting you share your creativity with friends and family. And if you need a break from your routine, the always-enjoyable Virus Buster makes its return.

EQUILIBRIO (DK-GAMES, 1-4 players, Rated E for Everyone, 500 Wii Points): In EQUILIBRIO, you must finish a series of levels by moving a ball toward an exit. To move the ball, hold the Wii Remote™ controller horizontally and turn it to tilt the playfield. You can also play using the Wii Balance Board™ (sold separately with Wii Fit). The ball is fragile, so don’t let it fall too far, and be sure to avoid deadly obstacles such as spikes and acid pools. The difficulty of the game adjusts according to your skill. Will you be tough enough to complete all 64 levels?

Uncharted Waters: New Horizons (Super NES™, 1 player, Rated E for Everyone – Mild Cartoon Violence, Simulated Gambling, 800 Wii Points): Uncharted Waters: New Horizons is a game set in the Age of Discovery, the golden era of European global exploration during the early 16th century. There are six different characters to choose from, all with different backgrounds and different motivations. Once you’ve chosen a character to play, you’re free to sail the world’s oceans as you wish, visiting a variety of exotic ports and making thrilling new discoveries.