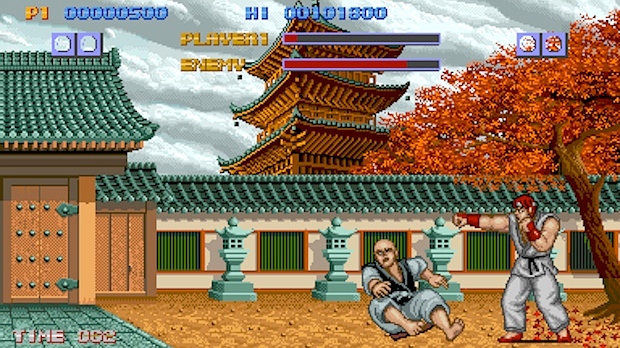 There isn’t a nice package to wrap the Nintendo downloads in this week, unlike the previous two which had Halloween or Domo themes. Still, games came out and the point of this is to tell you what the hell hit across Nintendo’s three digital download platforms: Virtual Console, DSiWare and Wiiware. Thus, we begin.

On Virtual Console this week, we see the release of Fighting Street (800 Wii Points), the colorful TurboGrafx16 port of the arcade version of Street Fighter. In addition to this, developer Sega has released R-TYPE for 500 Wii Points.

On the DSi front, Nintendo release Sparkle Snapshots for 500 DSi Bones. It’s a game that allows people to make backgrounds and add cheap effects for the pictures on the handheld. Speaking of game, strategy title Viking Invasion and brawler Battle of Giants: Dragons — Bronze Edition are also available for 800 DSi Bones respectively.

Finally, on WiiWare, party game Carnival King (700 Wii Points) and the wonderfully named puzzle title “Aha! I Got it!” Escape Game (500 Wii Points) are now available for download if you so desire.

Check below the fold for the PR descriptions of the game, and please tell us what you’re planning to download this week — we need the information for our secret records.

Sparkle Snapshots
Publisher: Nintendo
Players: 1
Price: 500 Nintendo DSi Points™
Description: Take photos and embellish them to your heart’s desire with Sparkle Snapshots. Choose from a large variety of fancy frames, backgrounds, stamps and funny outfits to decorate your photos, or use the powerful paint program functions to manipulate them in detail. Want to take a new photo and add it to your collection? Adjust the lighting conditions and lens type to match your subject and even use a shutter timer to allow yourself some extra time to get everything perfectly in place. Save your favorite snapshots in your Nintendo DSi Camera album and use Nintendo DS wireless communications to send your masterpieces to your friends. It’s all the fun of a photo booth – and more – in the palms of your hands.

Viking Invasion
Publisher: BiP Media
Players: 1
ESRB Rating: E (Everyone) – Mild Fantasy Violence
Price: 800 Nintendo DSi Points
Description: They come from the North, and they’re about to invade your Nintendo DSi system. Beware of Olaf the Viking and his motley crew. Even now, their drakkars are sailing up the rivers to attack your castles. It’s up to you to construct fortifications to prevent them from pillaging everything you own. The more you defend yourself, the more ferocious they’ll become. Before you know it, they’ll be invoking legions of fantastic creatures straight out of the mythical land of Asgard. Fortunately, the experience you gain will help you to build even more powerful defenses. Thwart all your assailants’ ruses and unlock new kinds of buildings: tornado-blowing windmills to repel the ships, monoliths that strengthen your fortifications or canons that shoot studded shells. Discover more than 10 levels, tons of units, a Campaign mode, a Survival mode and three difficulty levels. There’s even a little surprise at the end. Can you rise to the challenge and stop Olaf from taking your treasure home to his sweetheart Olga?

Battle of Giants: Dragons – Bronze Edition
Publisher: Ubisoft
Players: 1-4
ESRB Rating: E10+ (Everyone 10 and Older) – Mild Fantasy Violence
Price: 800 Nintendo DSi Points
Description: As last of the noble and rare Bronze Dragons, you must defeat the evil SALMU dragons and reclaim the 25 exclusive bronze gems they stole. Explore 10 maps and travel through the great jungles of Earth, the scorched grounds of Fire, the frozen wastelands of Ice and the floating islands of Wind. Customize your dragon’s appearance by changing its body, wings, tail shape and colors – even add stripes. Test your dragon’s fighting skills against your friends in head-to-head combat or four-player tournaments.

Carnival King
Publisher: Incredible Technologies
Players: 1-2
ESRB Rating: E (Everyone) – Mild Cartoon Violence
Price: 700 Wii Points™
Description: Carnival King is a fun-for-all-ages video game that brings the spirit and energy of competitive carnival games to the screen. Players compete for top scores and prizes while visiting three different amusement parks: Arcadia, Dreamland and Lagoon Park. Each park has four sets of games and a Bonus Round to test players’ speed and accuracy. For novices or sharpshooters, the games are continually challenging, and the difficulty level can be adjusted to match each player’s growing confidence.

“Aha! I Got It!” Escape Game
Publisher: Ateam Inc.
Players: 1
ESRB Rating: E (Everyone)
Price: 500 Wii Points
Description: Play alone or with family and friends to solve this puzzling adventure game. Today is Milo’s birthday, and he just got an amazing present from his dad: a room full of puzzles. Milo needs to solve all the puzzles to escape from the room. Shake, push and twist the Wii Remote™ controller to collect and use in-game items. There’s plenty to solve – see if you have what it takes to figure it all out.

Family Card Games
Publisher: Aksys Games
Players: 1-2
ESRB Rating: E (Everyone) – Mild Suggestive Themes
Price: 500 Wii Points
Description: Daddy, Mommy, Sarah and Billy are back for some good ol’ card game action. Try your hand at one of three card games: Daifugo, Speed or Memory. Family Card Games offers appealing cel-shaded graphics, endearing music and friendly, competitive match-ups. You can play one-player Daifugo or play against up to three other random players in an online match. You can also view your ranking and see how you match up with players around the world. Test your reflexes against another player in Speed and see who truly has the fastest hands. Memory will test your mental capacity as you try to remember where cards and their respective matches are.

Fighting Street
Original platform: TurboGrafx16 CD-ROM
Publisher: Capcom
Players: 1-2
ESRB Rating: E10+ (Everyone 10 and Older) – Mild Blood, Violence
Price: 800 Wii Points
Description: A port of the arcade version of STREET FIGHTER, the legendary fighting game that started it all. Players control RYU or KEN and battle against unique fighters from all over the world. The first fighter to knock out an opponent and win two rounds is the winner. Power up your attack to three different levels – the longer you hold a button, the stronger your attack. Input commands to perform special attacks and deal serious damage to your opponent. Combine your normal and special attacks effectively to fight your way to victory.

R-TYPE™
Original platform: SEGA Master System
Publisher: SEGA
Players: 1
ESRB Rating: E (Everyone) – Mild Fantasy Violence
Price: 500 Wii Points
Description: R-TYPE is a classic, side-scrolling arcade shoot-’em-up that was developed by Irem in 1987. It’s the 22nd century, and you are humanity’s last hope against the evil Bydo Empire. Your ship is called the R-9a “Arrowhead” and comes with a standard gun, but power-ups and upgrades are available in each mission. Navigate through eight challenging levels that will test even the best gamer’s reflexes. The SEGA Master System version features an exclusive secret level not found in any other release.