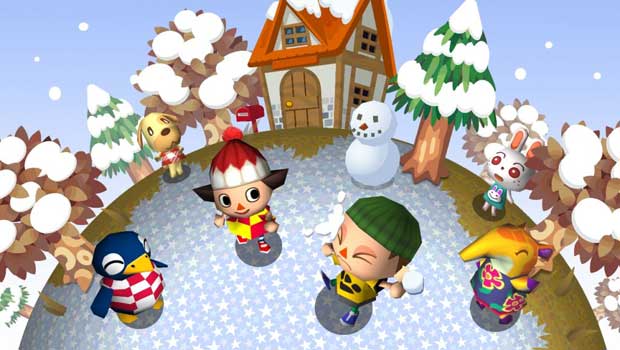 Nintendo continues its first-party DSiWare streak this week with two non-games — Animal Crossing Calculator (1 player, 200 DSi Points) and Animal Crossing Clock (1 player, 200 DSiPoints). As you’d expect, the calculator is just that, complete with a unit converter and the ability to listen to the “Animalese” pronunciation of numbers which will come in handy for absolutely nothing. The clock is a full featured analog or digital clock, complete with an alarm; you know how much we love clock apps here at Destructoid.

WiiWare gets Penguin & Friends – Hey! That’s My Fish (Gammick Entertainment, 1-4 players, 800 Wii Points), which likely has the “core” gamer perking up its ears at the very name. The title is a puzzle strategy affair in which penguins (that’s you!) attempt to catch fish on a gameboard of ice blocks.

Do the Math: Animal Apps, Toppling Towers and Hungry Penguins

Fans of the popular Animal Crossing™ series can enjoy a pair of downloadable—and practical—debuts this week via the Nintendo DSiWare™ service. Whether you’re telling time or doing arithmetic, these handy applications will give your daily number-crunching a critter-friendly boost. A new WiiWare™ game also takes a fun peek into the animal kingdom, while the latest Virtual Console™ release sends players underwater for classic Commodore 64 action.

Animal Crossing Calculator (Nintendo, 1 player, 200 Nintendo DSi Points™): Need to figure out what you owe Tom Nook or the amount in your savings account? Animal Crossing Calculator features the full functionality of a traditional calculator, including a Memory key and the ability to display up to 13 digits, adding a layer of atmosphere unique to Animal Crossing. Use the Unit Converter to turn one unit of measure into another (such as length, weight, volume and age), or track the history of calculations you’ve performed. Listen to the Animalese pronunciation of numbers when you press them, and watch for a favorite Animal Crossing character to appear when your result meets certain criteria. Get ready for an inventive and practical way to experience the charm of Animal Crossing.

Animal Crossing Clock (Nintendo, 1 player, 200 Nintendo DSi Points): Enjoy the atmosphere of Animal Crossing in a whole new way with Animal Crossing Clock. Select from either an analog or digital clock and set up to three alarms (with snooze functionality for those who need it). Make your own Town Tune or use sounds created in Nintendo DSi™ Sound, then assign them to the alarms you’ve set. Use the system’s internal clock or offset the time however you like. Then sit back and watch as different characters from Animal Crossing appear and the color of the sky changes as time passes. You’ll never miss an important appointment with one of your Animal Crossing friends again.

Penguins & Friends – Hey! That’s My Fish! (Gammick Entertainment, 1-4 players, Rated E for Everyone, 800 Wii Points™): The penguins are hungry and need your help. Catch all the fish you can before someone steals them from you. Strategy is fundamental in this exciting game. Keep moving ahead of the other penguins so you don’t get trapped, and try to get to the ice floes that hold more fish. One to four players can play Penguins & Friends at the same time, provided they can handle the polar cold. The board is made up of ice blocks with a set number of fish under them. The ice blocks are hexagonal and form a structure like a beehive. The starting position of the ice blocks can change, creating different game boards.

Tower Toppler™ (Commodore 64, 1 player, Rated E for Everyone, 500 Wii Points): Weird things are happening on Planet Nebulus. Someone or something has begun building huge towers on the sea floor without a construction license. Your mission is to ascend each of the eight cylindrical towers, passing various obstacles along the way, and to trigger the tower’s destruction mechanism to demolish the evil threat. Praised upon its original 1987 release for its graphical innovation, this is considered to be the most outstanding game from Hewson. Don’t miss out on this classic favorite.

Remember that both Wii and Nintendo DSi feature parental controls that let adults manage the content their children can access. For more information about this and other features, visit Wii.com or NintendoDSi.com.

The list of downloadable games is updated weekly on Nintendo’s Online Press Room at press.nintendo.com. For more information, please contact: