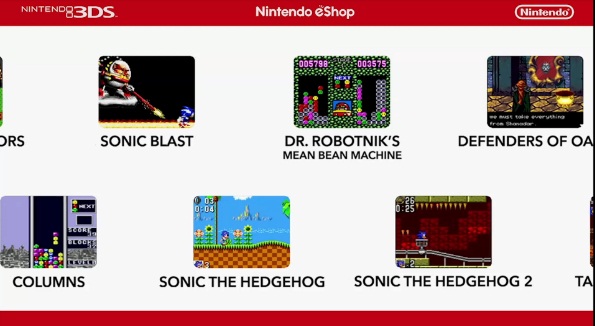 It appears as if more Game Gear games will be hitting the 3DS eShop in the coming months, as Nintendo has revealed a ton of info in regards to a partnership with Sega that involves not only retro games, but new ones as well.

In the Game Gear arena, Crystal Warriors, Columns (one of my all time favorites), Sonic Blast, Sonic the Hedgehog, Sonic 2, Mean Bean Machine, Defenders of the Oasis, Tails Adventure, Shining Force II: Sword of Hayja (yes!), Sonic Drift 2, G-Loc Air Battle, Sonic Labriynth, and Vampire: Master of Darkness will be coming to the 3DS in the future.

This is great news in terms of the portable Sonic games, as they’re incredibly hard to find out in the wild, not to mention an actual Game Gear to pair it with.