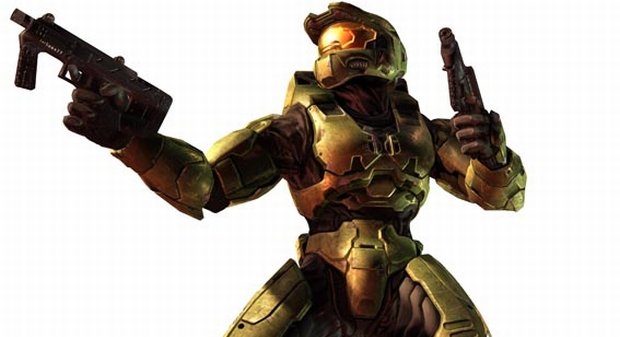 That’s right, you heard it here first. But now you want proof. Well luckily for you, your pal Nebones is here to help. Using my awesome magic powers, and super videogame skills, I took Master Chief out of the Xbox 360, and threw him into a game of Super Smash Bros. Brawl. Now all you need to do is believe what you see.

After seeing his team leader being brutally murdered, Pikachu sprang into action. Elictricity filled the sky around the small, ellow rodent. But as common science would tell you, elictircity is no match for gravity, and Pikuchu was soon seeing stars…stars of death.

Arguably the Chief’s biggest challenge, an experienced Bounty Hunter with a lot of combat expierance and a dangerous weapon. But of course, The Chief knew this, and before the woman in a man’s world had a chance to attack, The Chief was on a Ledge with a Sniper Rifle. The world went black for Samus Aran.

Sword and Shield are no match for pink needles. The battle was quick and furious. Link lunged at the Chief, landing a solid blow to his chest. Unfortunately for Link, his puny sword was useless againist the Chief’s brilliant armour, and a few quick needles to the head was a quick and painless death for the noble Elf.

It’s a well know fact that the Chief hates animals that do human things. As soon as the Chief saw the Fox, he was already dead. McCloud soon learnt that running as quick as you can at some one with a rocket launcher, was not a good idea. The rest of the Star Fox crew are still searching fot McCloud’s body parts.

The last remaining Nintendo character, Kirby knew he had to avenge his fallen comrades. he lept into the air and opened his mouth. He knew he had to suck the Chief. He closed his eyes and sucked as hard as he could. Suddenly, there was a long shaft in his mouth. He opened his eyes to see the Chief standing there with a shoot gun lodged firmly in the Marshmallow’s mouth….BANG.

And there you have it, undeniable proof that Master Chief is supior to all thing Nintendo. You may doubt my words, but you can not doubt your vision.

PS. MASTER CHIEF COULD NOT BEAT CAPTAIN FALCON SO HE DIED AND THE GAME WAS OVER.