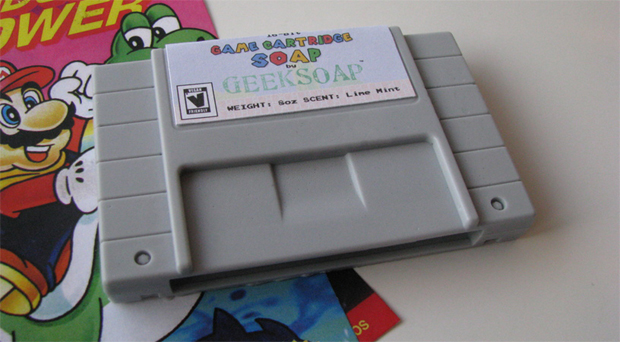 That’s a fantastic replica of a Super Nintendo cartridge. It’s also made completely out of soap, something I’m surprised I haven’t seen someone do before. This bar is made by Geeksoaps, who are making a range of soaps aimed at retro gamers who remember their cartridges.

So far, only Nintendo consoles are represented with soaps for Super Nintendo, Nintendo 64 and NES carts and a guest bathroom hand soap in the form of a classic GameBoy game. Word has it that they’ll be showing some love to SEGA consoles soon.

If I had any control whatsoever when it came to the soaps which grace the sinks of my home, I might consider these as an amusing novelty that nobody would bother touching. People would just think I was the weird guy who kept cartridges in his bathroom, which has probably happened at least once already.