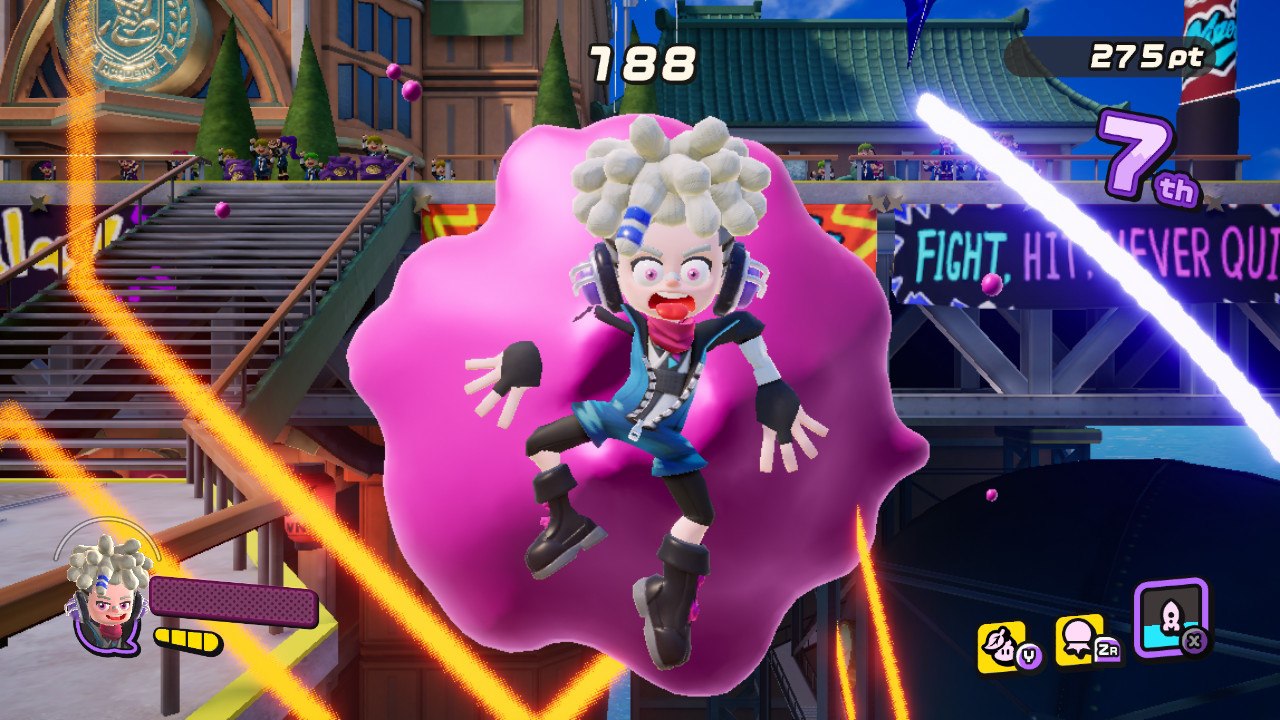 This week’s massive new Ninjala patch addresses pretty much every facet of the game, and it needed it.

Although I’ve dabbled in Ninjala on Switch every so often, the launch was pretty rough at times, so any updates are like a siren’s call; beckoning me back. “Version 2.0” has come nearly two months after the game debuted on Switch, and according to Gungho, there are three tenets it addresses: “Offer an ideal matching environment – Improving player experience through UI/UX – Further polish game balance.”

The former is thankfully a “go big or go home” approach, as the studio has opened up worldwide matchmaking “due to player feedback.” So queue times should go down significantly and you can play with friends in other regions. Gungho warns us of potential lag, however.

In terms of raw mechanics, several weapons have been adjusted (mostly buffed so items feel more impactful). The UI has also been improved, which extends to an on-screen parry guide for more transparency when fighting. On a macro level, main menus have been smoothed over and now offer more information at a glance. That’s enough for me to try it again! You can find the highlights below.

Ninjala 2.0 – Matching on a Worldwide Scale

Up to this point, matching has been broken down into four regions: North and Central America, Europe, Asia/Ocenania, and Japan.

The initial intent of this was to prevent matchups between players located physically far away, which were more likely to suffer from lag and transmission speed issues.

Since then, however, we have taken into account player feedback, in particular that it was frustrating not to be able to play with family or friends who live abroad in another region, or to find opponents in one’s own region late at night or at other times when the player base was reduced.

To address the situation, we have now made it possible to match with players of any region, provided that transmission speeds fall within defined acceptable parameters. Now that matching has been unified across all regions, we believe it will now be possible to find worthy teammates and opponents at all hours of the day, and that Battle Royale ranked matches will be more rewarding.

In accordance with this change, player rankings—previously broken down by region—will also be unified across the entire world. From this day forward, Ninjala will become a truly global competition.

*Please note that as a side effect, you may be more likely to experience lag depending on the location of your opponent. Please confirm your connection speeds via the newly added lag value display and antenna icons. As a general reference, a relatively smooth gameplay experience can be enjoyed with values of up to 150 msec, but 200 msec and beyond will result in considerable lag. Furthermore, in Ranked and Free Matches, opponents and servers with lower lag values will be prioritized.

To improve transaction speeds, we recommend that you connect with a wired connection or a stable, high-speed Wi-Fi connection.

We have implemented a number of improvements to the Ninjala UI.

– An icon has been added to indicate a big weapon wins out over a smaller weapon with the same attack. This adjustment will make it easier to tell when a parry was won or lost normally, or due to weapon size.

– When choosing your parry attack, attacks with a Super Armor effect in the event of a tie will be indicated as such with an icon.

– After choosing your parry attack, when a tie results in Super Armor being activated, this will be indicated with an icon.

Certain Yo-yo and Hammer Type weapons offer a Super Armor effect in the event that you and your opponent choose the same attack type. This UI modification will make it easier to recognize which weapons offer this effect, as well as when the effect is activated.

– It will now be easier to understand the current matching situation in the Standby Dojo. The remaining number of users still preparing in the lobby will now be displayed. When everyone is ready, it will change to a message indicating that the battle will begin soon.

– The initial list displayed after selecting Room Battle has been changed to include Team Battles.

– In the event that players have formed a party, it will now be possible to see which players are currently partied with each other in the Matching Lobby and elsewhere.

– The initial cursor position for the matching confirmation screen has been switched to “Yes”.

– Yes/No confirmation windows can now be closed with the B Button.