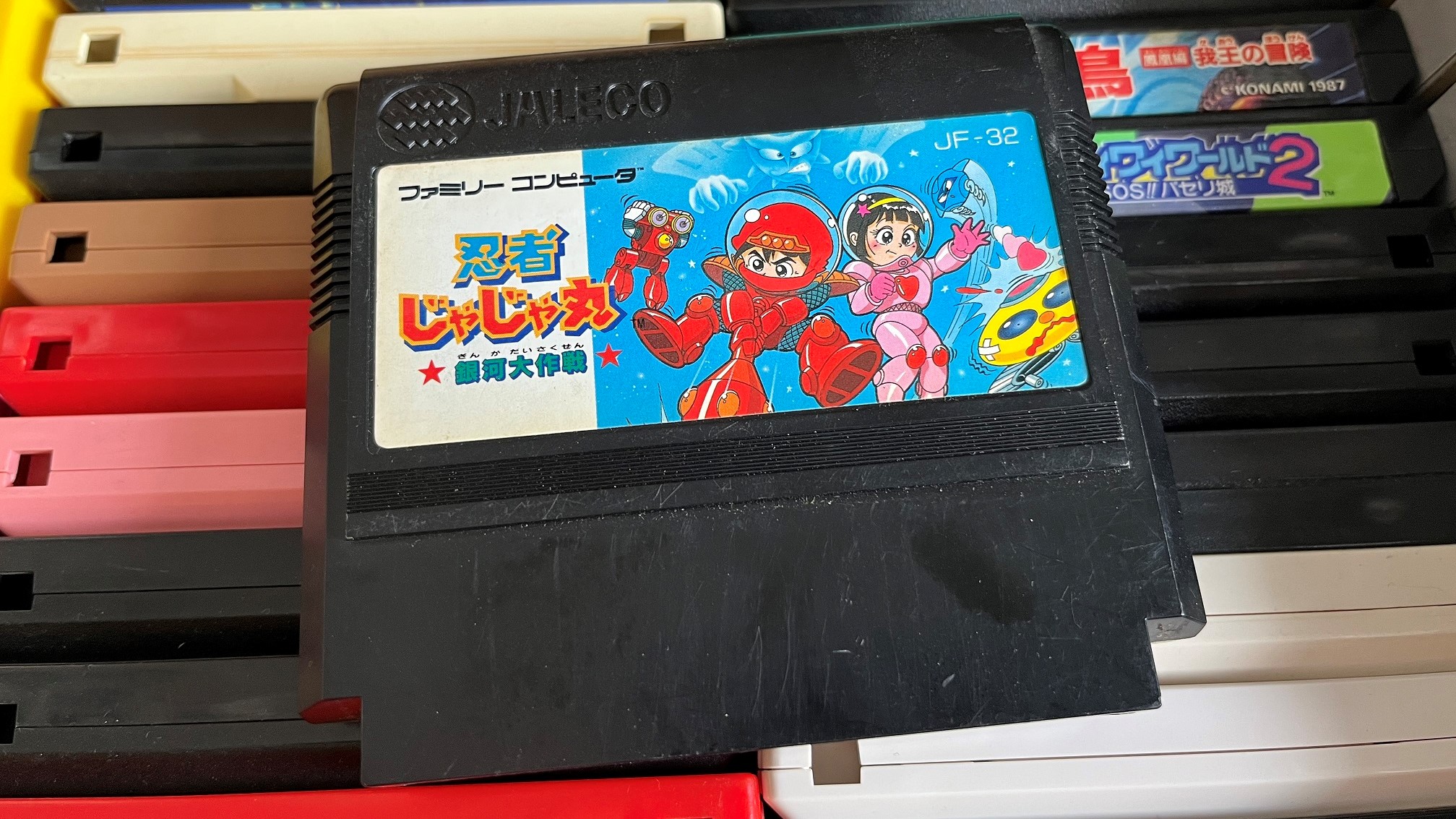 But they’re in space

The Ninja Jajamaru-Kun series took a hard left turn after Jajamaru no Daibouken. Considering it started as something of a rip-off of Ninja-Kun after Jaleco published the Famicom port of that game. It never really had a strong identity, but Jaleco was going to throw it against the wall as many times as it could until it finally stuck.

It never stuck. Reinvention didn’t work. The biggest offshoot was Ninja Jajamaru-Kun’s attempts at JRPGs, but 1991’s Ninja Jajamaru Ginga Daisakusen for Famicom is perhaps the one that feels most desperate. That’s not to say it’s bad, but if some sort of game vampire sucked out every last ounce of what little personality the series had, this is what you’d get. There is blood on all the shoes you’ve worn

First of all, I guess we’re in space. Despite the series focusing on Edo-era Japan, we’re suddenly in space. Next, they took away Jajamaru’s shuriken. Largely, it’s the Jajamaru characters in a game that doesn’t at all resemble any of the others. It’s not just that the art style has changed, it’s that everything has. Gamapakkun appears but in robot form. It’s better than no Gamapakkun at all. That would have been very upsetting.

Ninja Jajamaru Ginga Daisakusen is actually a hop-and-bop platformer, like all the other hop-and-bop platformers released in the wake of Super Mario Bros. 3. What this game does different is essentially nothing. It has this heavy reliance on using this charge-up dash move to get over gaps, which is one of the dullest focal points I can imagine. However, most levels have at least one instance where you have to charge up your dash to make it across or over obstacles.

Don’t get me wrong, there are side-scrollers out there with some indispensable jumps. For example, I can’t imagine the Mega Man X series without the dash jump. But Mega Man X wasn’t just dash jump the game. It also had its wall jump. Ninja Jajamaru Ginga Daisakusen has this dash jump, and essentially everything after that is an afterthought. Let me backpedal for a moment here, since Ninja Jajamaru Ginga Daisakusen doesn’t deserve to just get beat on. Despite my gripes, it’s honestly a perfectly competent game. The graphics are entirely on point for a 1991 NES release, and the level design is varied enough that it’s clear that the development team tried with this release. The graphics are colorful and detailed, which is a huge departure from earlier games. It also features some difficult technical trickery, such as four-way directional scrolling in some stages.

One nice feature is that you can play as either Ninja Jajamaru-Kun or Sakura-Hime. There isn’t a difference between them aside from appearance, but playable female protagonists were extremely rare at the time. You can also select her without her just being a palette swap assigned to the player-2 controller.

It can be challenging, but it’s rarely frustrating, unless you consider the fact that there are limited continues before you have to start over. If I rented this game as a child, I probably would have been enamored by it. The bright graphics and inoffensive gameplay just remind me of licensed scrollers like Felix the Cat. 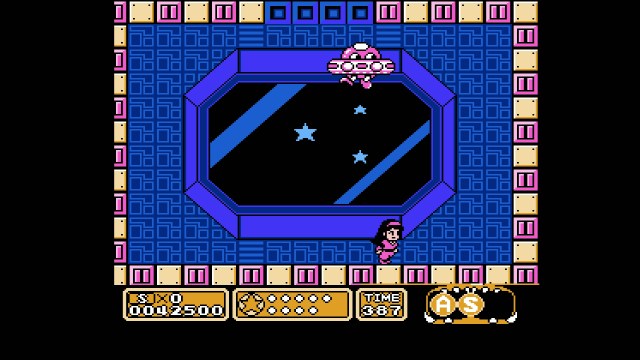 Just because the design is inoffensive, however, doesn’t mean there aren’t problems. The power-up system is particularly sloppy. Most of these consist of weapons or items that grant additional powers, but they’re all extremely limited. Not only that but they’re placed around all willy-nilly. On one such occasion, I found Gamapakkun in an item box, only to find that I couldn’t proceed past the small section I was in that contained exactly one enemy. This wasn’t random, every time I replayed the level, he was in that box, even though it wasn’t contextually appropriate.

I rarely ever found an item on an occasion where it felt needed. Well, that is aside from the armor which affords your glass-boned hero an extra point of health. However, jetpacks rarely carry you far enough across obstacles, and weapons are just ineffective enough to be useless. It doesn’t feel like a huge stretch to reimagine the power-up system into something more fitting to the game. Maybe something along the lines of what Felix the Cat had going for it.

There are also letters that you collect, but I couldn’t figure out what they do. The letters are A, S, and J. I read somewhere that they affect the level boss’s attack pattern, but I really didn’t care. They gave me the ability to spell ASS on my screen. At that point, you can throw any practical usage out the window, as I’ll always prefer ASS.

Then there’s the music, which is passable at its very best and baffling at its worst. It never got as annoying as, say, Koneko Monogatari, but some of the tracks barely sound like music. Like, maybe they technically qualify as music, but they’re not constructed in a way to sound pleasant or memorable. 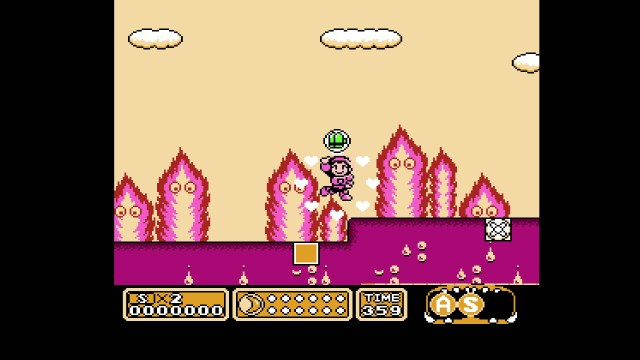 The level design gets pretty weird. It’s not exactly ambitious, but you could tell someone challenged themselves to present something new each time the screen flipped. However, regardless of what got thrown at me, I found it as bland as a styrofoam steak. Like I said, if I played this as a kid back in 1991, it might have left an impression. However, as a jaded and perpetually tired adult who has seen their share of hop-and-bop, I couldn’t even stay attentive enough to get through the past couple of levels.

That’s pretty sad since I have a pre-existing soft spot for the games in the series. I always found that, while they were inadvertently janky, they were charming enough to be memorable. Ninja Jajamaru Ginga Daisakusen is the opposite of that: more competent but entirely forgettable.

We nearly got a localized release in North America. Like the other localized games in the series (Maru’s Mission on Game Boy was a Jajamaru-Kun game, for example), it was going to be renamed to something unrelated. Jaleco was going to call this one Squashed, and it was going to lean heavily toward vegetable puns. However, it was canned before launch. This was probably because the market for NES games was sinking fast after 1991. Even games with brand power, like 1993’s Duck Tales 2, were only released with limited supply. It would have been a risky endeavor.

However, the prototype was leaked to the internet if you want to play an English version of Ninja Jajamaru Ginga Daisakusen. The Famicom version isn’t exactly encrypted with Japanese text, to begin with. You might miss out on some of the finer details, but it’s completely playable to English monolinguists. You’ll just miss out on all the food puns.