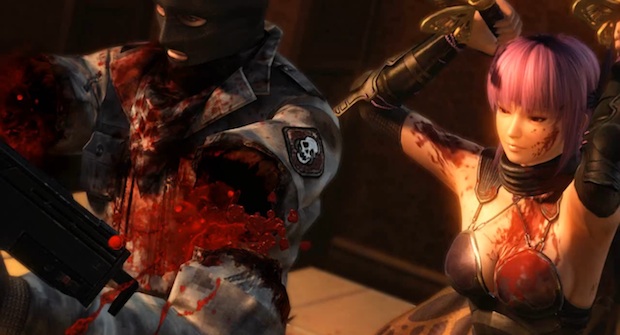 I was able to give Ayane a go in upcoming Wii U game Ninja Gaiden 3: Razor’s Edge tonight at a Tecmo Koei press event in Tokyo. Tecmo Koei said that they were only offering a playable demo at their event as what they had to show was too bloody and violent for the Tokyo Game Show floor. After playing the demo, I can easily believe that.

Ayane, the kunoichi, is is a new playable character in this Wii U version, and a bit of a change of pace from series protagonist Ryu Hayabusa. Team Ninja’s Fumihiko Yasada, game director, said that the image of this beautiful girl fighting and getting bloody “symbolizes the experience and challenge you will feel in Ninja Gaiden 3: Razor’s Edge.”

Ayane loves to spill blood. Her first appearance in this demo is on a massage table, showing gratuitous side boob and hip in a massage session in Paris. Masked goons surround her outside as she receives her rubdown, but one manages to sneak in and hold Ayane at gunpoint. She’s not at all intimidated as the attacker holds the muzzle of his semi-automatic to her face, but does take offense as he starts to tilt it down into her cleavage, pulling at the towel that she had covered herself with.

Ayane reacts with over-the-top violence, slicing off limbs of the attackers cleanly. It’s a bloodfest as the arterial content of all attackers rains up and out from her swift cuts. I got a real sense of just how sharp Ayane’s blade must be with the speed and effortlessness of her attacks. These were quick but defined moves that felt really good on the Wii U Pro Controller.

A second section of the demo took Ayane out of the massage parlor and into the streets of Paris, where countless other attackers lay waiting. Even with Ayane’s double blades and fast attacks I struggled to stay alive against the bullets, punches, blades and even missiles came at me from every direction. Area-effective specials and throwing blades helped keep attackers at bay, but individual enemies never go down easily in Ninja Gaiden games, and with this many to contend with, I was having trouble keeping afloat.

Maybe I should have looked into the newly added Ninja Skills, which are unlocked by using earned karma.

But I held fast with what I had for this demo, pushing back with against seemingly endless circles of thugs with everything in my arsenal. I’m pleased to say that the combat in Razor’s Edge hits that rare zone where things feel nearly impossible, and sometimes gets close to exhausting, but also somehow still manageable when you play at the very top of your game. The game makes you work your fingers and your reflexes in continual streams of battles that make you feel like you just barely survived. If you do manage to survive, it makes you feel like a really skillful player, and that always feels great.

Even with the little time I spent with Ninja Gaiden 3: Razor’s Edge, I got a good sense of the work that Team Ninja put into it in response to the fan criticisms of the previous version. I would need a lot more time with the game to make a stronger call, but it’s already clear that Team Ninja has been hard at work here.

Ninja Gaiden 3: Razor’s Edge will be released alongside the Wii U console on November 18.