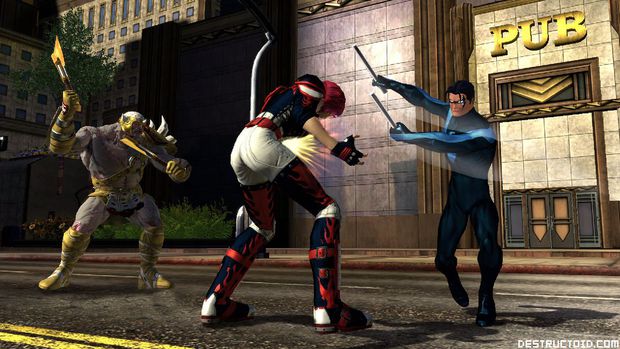 Sony Online Entertainment has revealed that Nightwing will appear in the upcoming PlayStation 3 and PC MMO DC Universe Online.

Of course, this is no surprise. It’s the “universe,” guys. That’s like, everything. The list of DC characters that will appear in the game is staggering, everyone from Superman to Batzarro, Congo Bill to Two-Face. So Nightwing should be no exception, what with his little pieces of black hair hanging down in front of his face. His father, General Zod, should be proud. [As pointed out to me by grebweb, the Nightwing pictured here is the original, Dick Grayson. Comic geeks, forgive me, for I have sinned.]

While MMOs on consoles haven’t quite lived up to PC expectations, what I’ve seen of DCUO looks solid and well-adapted to the PS3. And if it’s going to be awhile before I have to fight off the massively online zombie hordes, then DC super heroes will do.