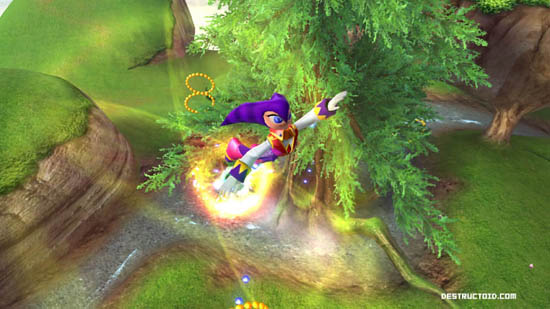 When I finally had a chance to play NiGHTS: Journey of Dreams at this year’s Tokyo Game Show, I noticed that the control scheme (using the Wii Remote and Nunchuck) wasn’t as easily accessible as its predecessor’s. I noted that the degree of movement seems more constrained, and NiGHTS seems to be a bit less capable than before. Too bad Sega didn’t let me demo it with a Gamecube controller, as the game’s developers prefer it over the Wii Remote.

“Personally I prefer using the Wii-remote on its own – you just fly. You feel like you’re flying, moving more smoothly just with the sensation and freedom of it. But the team use the Gamecube controller because it’s so similar to the feel of the original 3D controller. The analogue stick is shorter and more like the Saturn pad.”

Iizuka also mentioned in the interview that there were no plans for a PS3 or Xbox 360 version of NiGHTS, but would like to make a NiGHTS 3 some day.

Lastly, a virtual high five goes to Games Radar for asking about a possible Burning Rangers sequel. When asked, Iizuka said, “It’s not my title, so I can’t comment. But I hear there is a lot of demand for a sequel, to bring out Burning Rangers on Wii so… we’ll see.”