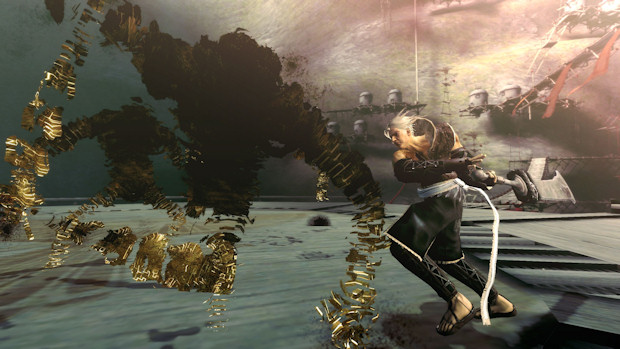 NieR director Yoko Taro is working on a game that undeniably looks sexy in the graphical department, but it seems like too many hi-def visuals can spoil your eyes. Taro recently spoke of his personal experiences at the Tokyo Game Show, describing the various Square Enix trailers he saw and outright claiming that he found Final Fantasy Crystal Chronicles: The Crystal Bearers “painful” to watch.

“I wanted to see the NieR video at TGS, so I watched the Square Enix booth theater continuously,” explains Taro, who apparently isn’t allowed to look at his own trailers. “It was looping, so after FFXIII came Crystal Bearers. To be honest, the graphics in Crystal Bearers are hard on the eyes … Bearers‘ graphics are well done, I get the feeling that you could call them the highest level for Wii. However, SD graphics are just painful.”

“Nintendo should use their profits to make a backwards compatible HD Wii, or release an optional upconverter for the Wii, or give the television industry money to properly handle SD video.”

I find certain Wii games hard to look at, but a well-designed title can look pretty good. I personally think a lot of Nintendo’s first-party games are actually quite good looking, at least for what they are. What do you think, though? Do you find Wii titles hard on the eyes, or is that a complaint for the graphic whores only?