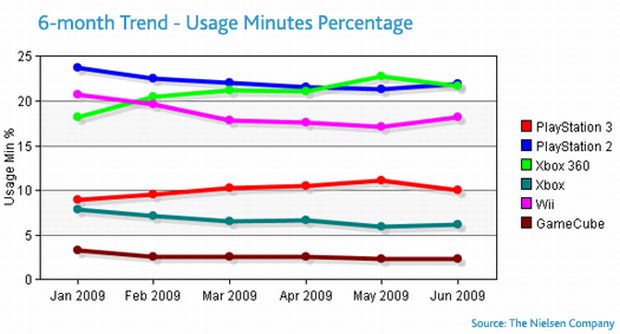 Good news for those of you worried that the poor state of the economy is taking a toll on videogames — numbers are up. Nielsen recently reported on their blog that numbers point to a stronger summer than last year’s with a 21% increase from last year’s figures. We also learned that just under 50% of gamers are over the age of 18 and that Xbox 360 and PS2 are neck and neck for the most played systems.

A sex specific portion of the survey also points out that more guys are playing the 360, more girls are playing the Wii, and the PS2 has an even amount of both. The number of people playing the PS3 is easily half of thos eplaying 360 and Wii, which makes me sad. I’m glad the PS2 still performs so well, but I want to see the PS3 do the same. What does it need to get here, you think — more price drops?