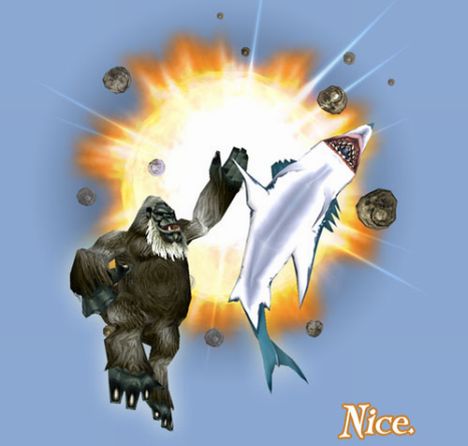 It’s no secret that I love Dr. McNinja. It is the greatest Web comic out on the Internet right now and I have pretty much bought every shirt the site has put out. Hell, I even featured Dr. McNinja on Art Attack Friday with the excuse that Dr. McNinja’s Raptor is named after Yoshi.

I just got around to checking the latest strip where Dr. McNinja and crew are fighting a Lobster Man named the Robster and saw that he mentioned Blizzard in his latest news update. Turns out that when people have upgraded WoW with Wrath of the Lich King, they’re treated to the above image.

For those not in the know, the image is based on this shirt design by Dr. McNinja of a shark high fiving a gorilla in front of an explosion. It’s probably one of the greatest shirts ever made. This shirt, by the way, started the whole shark craze here on Dtoid.

I don’t know about you, but I think my weekend has become a little bit more awesome thanks to this little Easter Egg.

Filed under... #Easter Eggs#World of Warcraft