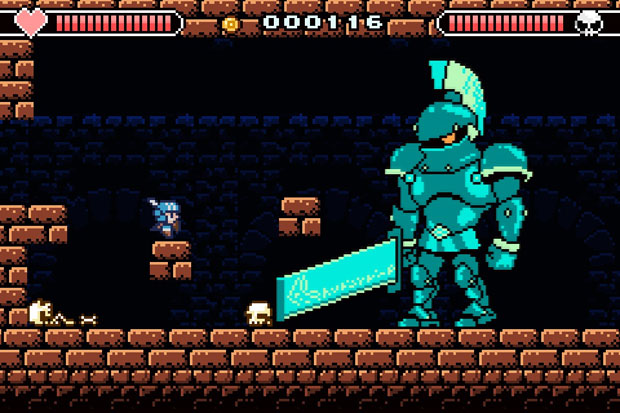 Let’s get down to business

After checking out The Binding of Isaac: Rebirth at PAX Prime, I spent a decent chunk of time with another upcoming Nicalis project, Castle in the Darkness. It’s a challenging platform-adventure PC game that feels all too appropriate given the company’s prior involvement with 1001 Spikes.

Admittedly, words like “challenging” and “difficult” get thrown around often — too often — when describing games that aren’t afraid to test players. But good lord, Castle in the Darkness was tough. I must have died 50 times during my playthrough, and that’s being conservative.

Part of that has to do with your limited health — a few hits is enough to do you in, at least early on — and your knight’s movement, which takes getting used to. He’s quick, super quick, and his initial sword attack doesn’t extend very far. It was frustrating at first to come to terms with all of this, but I suspect the fast pace will feel great with sufficient practice and muscle memory.

The game’s structure is exploration-based in that you’ll hit switches and acquire items that will allow you to reach previously inaccessible areas. There’s also going to be a ton of bosses, based on what I played. That damn owl from the trailer gave me hell. Expect gear upgrades, too.

Castle in the Darkness is rather clearly inspired by NES classics in the genre, particularly Castlevania, which I don’t consider to be a negative. Maybe you do. Either way, I’d suggest getting your hands on it before casting any final judgments. Could be pretty cool at the right price.