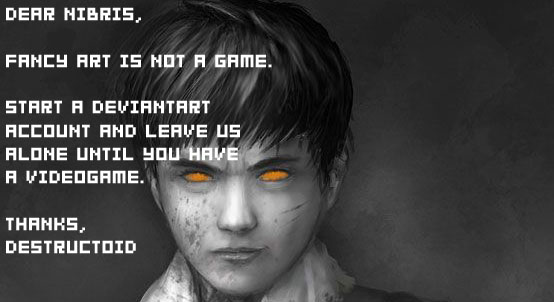 NeoGAF member GC|Simon recently received an update e-mail from the Nibris team, in which they delivered the inevitable news — their Wii title, Sadness, will not be coming out until 2009. From the e-mail:

Nibris is alive and well. From August Nibris is exclusively represented by FOG Studios, Inc.(www.fogstudios.com), the leading agency for interactive representation since 1979. We are still actively working at our projects (Sadness – Wii – 2009, Double Bloob Q2 2008 and ROTR – DS Q 3 2008) and it will be announced in the gaming press in certain time.

So now that we’ve gotten that out of the way, let me make one thing clear — I am not convinced that this game has (or ever will) exist. Besides some concept art and fancy talk, Nibris has yet to deliver a single screenshot, video, or demo of playable code. Despite how grand it sounds, as far as I’m concerned, there is no game called Sadness.

So until we see evidence that contradicts that, Nibris, put up or shut up. Even the (by all accounts) reasonably well-connected “Surfer Girl” mentions that she heard you guys “rebuked publisher interest” when they had asked to actually see a game. If you actually have a videogame, we’d be more than happy to take a look at it.

Contact us, and prove me wrong. I love being wrong.