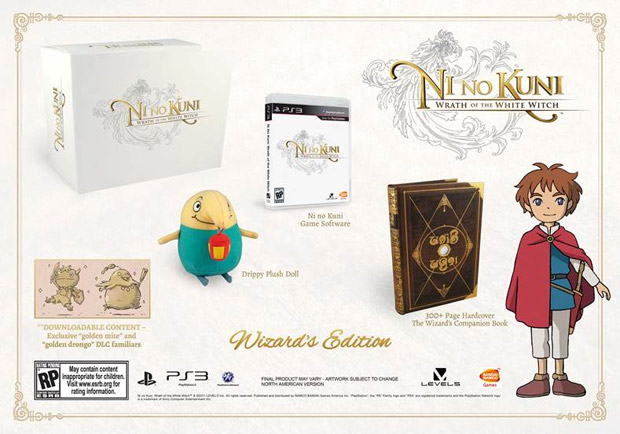 Taking a page from the success of crowdfunding platforms like Kickstarter, Namco Bandai is going to expand the scope of Ni no Kuni: Wrath of the White Witch – Wizard’s Edition for the United States based on the number of pre-orders obtained at ClubNamco. They’re even calling it “Ninostarter.”

At the very least, the $99.99 Wizard’s Edition will include a 300-page hardcover Wizard’s Companion book, a Drippy plush, and two exclusive DLC familiars: golden mite and golden drongo. Curiously, while the site does publicly track our collective progress, it doesn’t explicitly say what each goal will add to the set.

Other than that, this seems like a neat approach, especially since the Ni no Kuni special edition is already something many of us want. If you’d like to partake, you’ll need to pre-order by August 31, 2012.

Filed under... #Level 5#Ni No Kuni#Ni no Kuni: Wrath of the White Witch