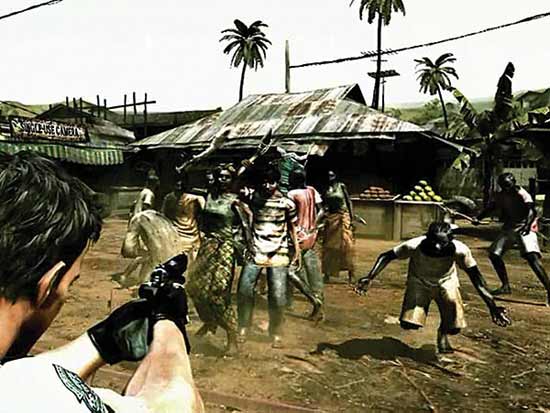 During a recent interview with MTV Multiplayer (concerning the depiction of blacks in games), N’Gai Croal of Newsweek gave an enlightening talk about the controversy behind the Resident Evil 5 trailer, and how Capcom could have done things to avoid the unnecessary fuss.

According to Croal, it was just a few moments in when he realized that there were some things about the trailer that had the potential to inflame members of the black community, however unintentional it might have been. While the majority of us were fawning over the detailed images and dynamic lighting — not to mention getting all antsy about the debut of a new Resident Evil game on next-generation hardware since RE4 righted the series again — others were seeing something starkly different. To them, the trailer contained just over three minutes of classic racist imagery that many Caucasians (including myself) never even noticed:

More on this, after the jump:

“There was stuff like even before the point in the trailer where the crowd turned into zombies. There sort of being, in sort of post-modern parlance, they’re sort of “othered.” They’re hidden in shadows, you can barely see their eyes, and the perspective of the trailer is not even someone who’s coming to help the people. It’s like they’re all dangerous; they all need to be killed. It’s not even like one cute African — or Haitian or Caribbean — child could be saved. They’re all dangerous men, women and children. They all have to be killed.”

Croal then goes on to touch upon Resident Evil 4, and that even though the zombies (yes, I know they were supposedly not zombies in that game) were obviously non-white, a fair comparison cannot be made, considering the historical American race relations of the past:

“And given the history, given the not so distant post-colonial history, you would say to yourself, why would you uncritically put up those images? It’s not as simple as saying, “Oh, they shot Spanish zombies in ‘Resident Evil 4,’ and now ‘black zombies and that’s why people are getting upset.” The imagery is not the same. It doesn’t carry the same history, it doesn’t carry the same weight. I don’t know how to explain it more clearly than that.”

Still not sold yet on the idea that the trailer wasn’t exactly thought out and planned as well as it could have been? Croal expands upon the effect imagery has on the larger audience when some historical context is brought into play:

“It’s like when you engage that kind of imagery you have to be careful with it. It would be like saying you were going to do some sort of zombie movie that appeared to be set in Europe in the 1940’s with skinny, emaciated, Hasidic-looking people. If you put up that imagery people would be saying, “Are you crazy?” Well, that’s what this stuff looks like. This imagery has a history. It has a history and you can’t pretend otherwise. That imagery still has a history that has to be engaged, that has to be understood. If you’re going to tread, if you’re going to engage imagery that has that potential, the onus is on the creator to be aware of that because there will be repercussions in the marketplace.”

He finishes up by saying that he doesn’t know for sure how Capcom views the whole situation, and the potential ramifications of the game’s eventual release. Will it hurt the franchise? In the past, some retailers have tended to shy away from titles that might cause them to be viewed in the wrong way. You know, the image thing Croal’s been referring to throughout the entire interview.

Contrary to the ebony-helmeted icon that I’ve chosen to represent myself here at Destructoid, I’m not of African-American descent. As a result, I may not be as finely tuned into the black community, as say, an African-American would be. However, I find it absurd to think that a Japanese publisher would set out to purposely (or even accidentally) conjure up negative racial overtones towards blacks while publicizing their next game.

Equally puzzling is Croal’s mention of WWII-era Jews as a possible analogy. Although I can appreciate the point he is trying to make, there really aren’t any parallels that one can draw from such a comparison. What does this really have to do with historical imagery of blacks in America?

Capcom has but two goals with Resident Evil 5: to weave a story that is true to the RE lore, and to make a profit at the end of the day. By nature of most shooters, it’s going to be one man taking on many. In this case, Chris Redfield (who is white) just so happens to be taking on zombie-fied villagers that are black. I have yet to get my hands on the finished game, but judging by the trailer alone, there is nothing about it that overtly depicts the African-American community in a negative manner.

Go back and view the trailer one more time, and then decide for yourself if you see anything worth commenting about (other than the game itself) on a social level. Are there any villagers that seem to be pigeonholed into a stereotypical view that screams out to you in a way that says, “Aha! That is obviously aimed at denigrating blacks!”?

No, you won’t find that. What you will find is a stunning trailer for a highly anticipated game, which just happens to take place in an area where non-white villagers are under the influence of something evil — and it might lead back to a shady corporation that goes by the name of Umbrella. To think otherwise would just be reaching out and grasping at straws in order to back up an argument that shouldn’t even exist in the first place. What do you think?