After the announcement this morning, I was interested by the ideas that Next Up Hero was tackling. Death really has become kind of pointless in modern gaming, so why not turn that into a game mechanic? That it was aiming at being a beat-’em-up is also gold for me, since I love the genre and its pick-up-and-play styling. Oddly, that isn’t the full story with Next Up Hero.

The game has an ambitious goal of incorporating online instances into level design that sees a community of people all working together to thwart enemies and bosses. Before I even got further into my playtime, I had to know if Next Up Hero was online-only. That is the biggest obstacle that will prevent a lot of people from becoming fans, and sadly, the game does require it. 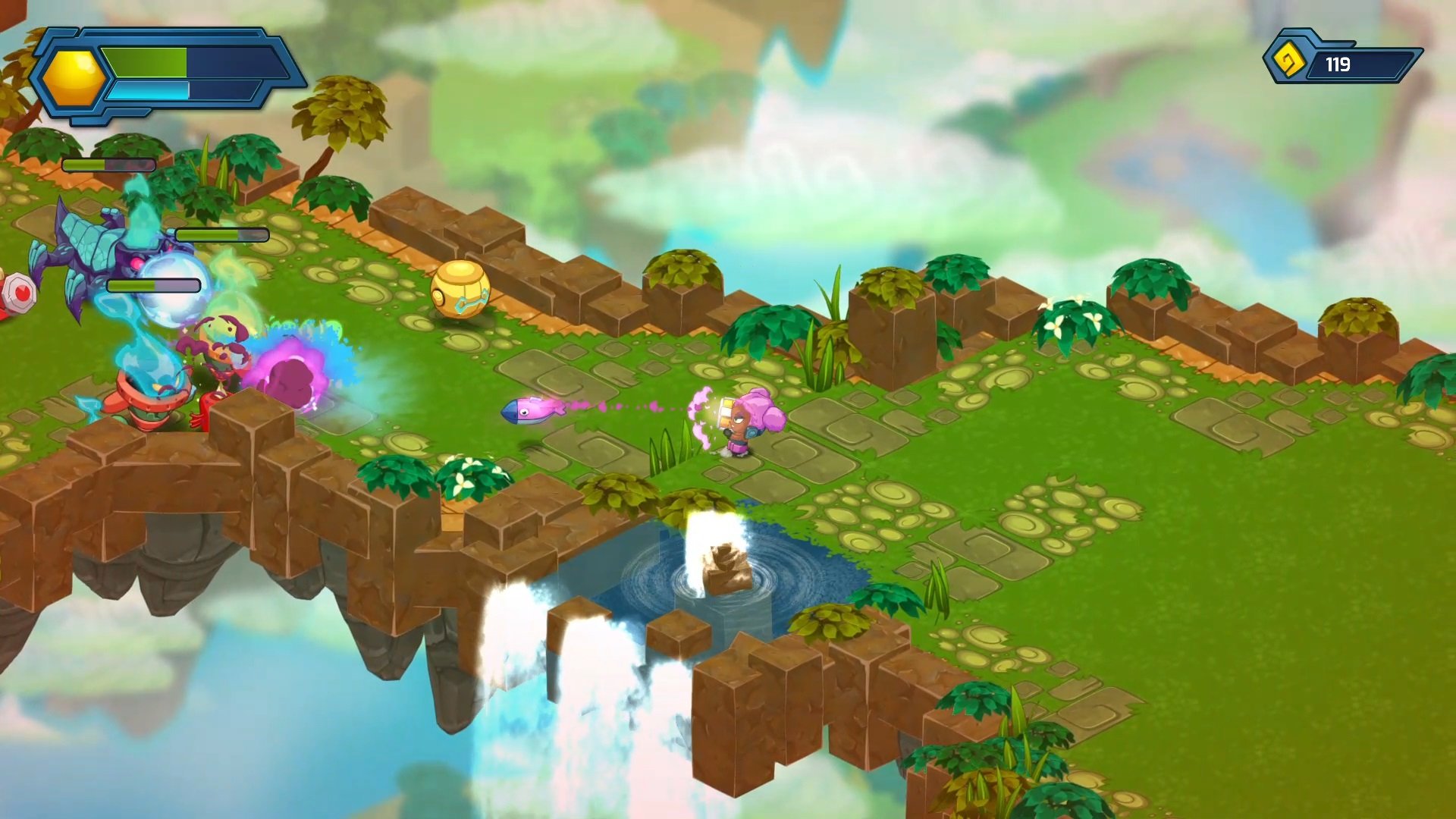 Next Up Hero isn’t exactly a beat-’em-up; the game is more a twin-stick shooter with action game elements. You’ll move around an isometric game map and aim your character by moving the right joystick in the direction of enemies. From there, you’ll attack with the triggers and can utilize specials moves from your cast of characters.

They encompass the typical mold of RPG archetypes, with a barbarian, mage, and archer all present. The game starts to get a little funky by introducing Rooster Teeth personalities (such as hosts from Funhaus) as playable characters, but you can also control a lady who effortlessly carries a rocket launcher over her shoulder.

The basic goal of each level is to clear out all of the enemies and reach the end portal. This can be achieved by yourself, but you’re probably not going to get far. While there isn’t any direct co-op or multiplayer, since the game is always online, each map will form an instanced area that other players can attempt to tackle. When they perish in combat, their corpses will populate your version of the level and will be ripe for resurrection as an AI companion, called an “Echo.”

While that is neat, in and of itself, it could be abused by having friends continuously spam the levels with dead bodies and eliminating all challenge from the gameplay. Thankfully, there is a counter-balance that introduces a nice risk/reward element. Through a mechanic called “The Ancients,” you can summon ancient heroes to give you buffs in combat by sacrificing your summoned “Echoes.” 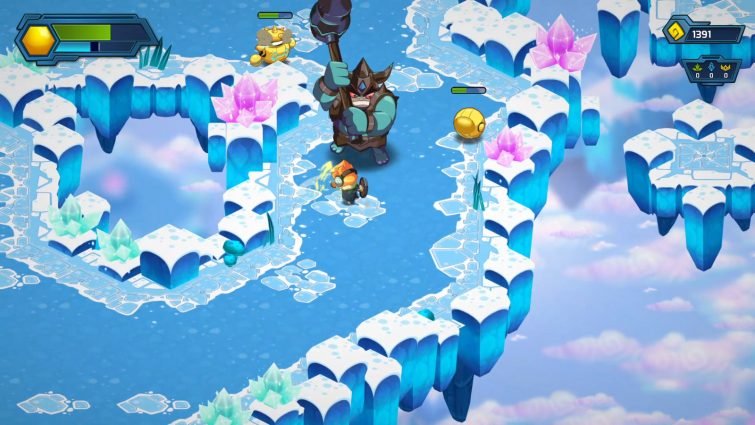 They aren’t all instantly cast, either, so you might have a situation where you’re surrounded by enemies and have the ability to summon a defensive ancient, but you don’t have the breathing room to do so. Hell, even resurrecting “Echoes” isn’t immediate, so you can’t just spawn allies in the thick of combat.

It all plays really smoothly, but doesn’t always feel like a genuine challenge. When you first create an instance, you’re more than likely just going to die, which can be frustrating. Through the community element, you should eventually be able to conquer that challenge and unlock better abilities for your heroes. That whole dynamic of decreasing difficulty by having other people play your instance is neat, but it does artificially bloat out the playtime a bit.

Thankfully, you can create instances with a wide gamut of parameters that can limit the amount of help you’ll receive. There are three difficulty levels you can place the level generator at, as well as a duration for the instance and whether or not rarer enemies will spawn. If you want your instance to remain active for a month, nothing is stopping you from doing that.

In another cool twist, you actually don’t need to defeat the boss at the end of your instance. Since defeating a boss will completely end your session, you can knock them out and extend your instance by creating additional levels. I didn’t get to experience this with my demo of the game, but it sounds like a cool way to get more people involved by passing off the torch to another challenger. 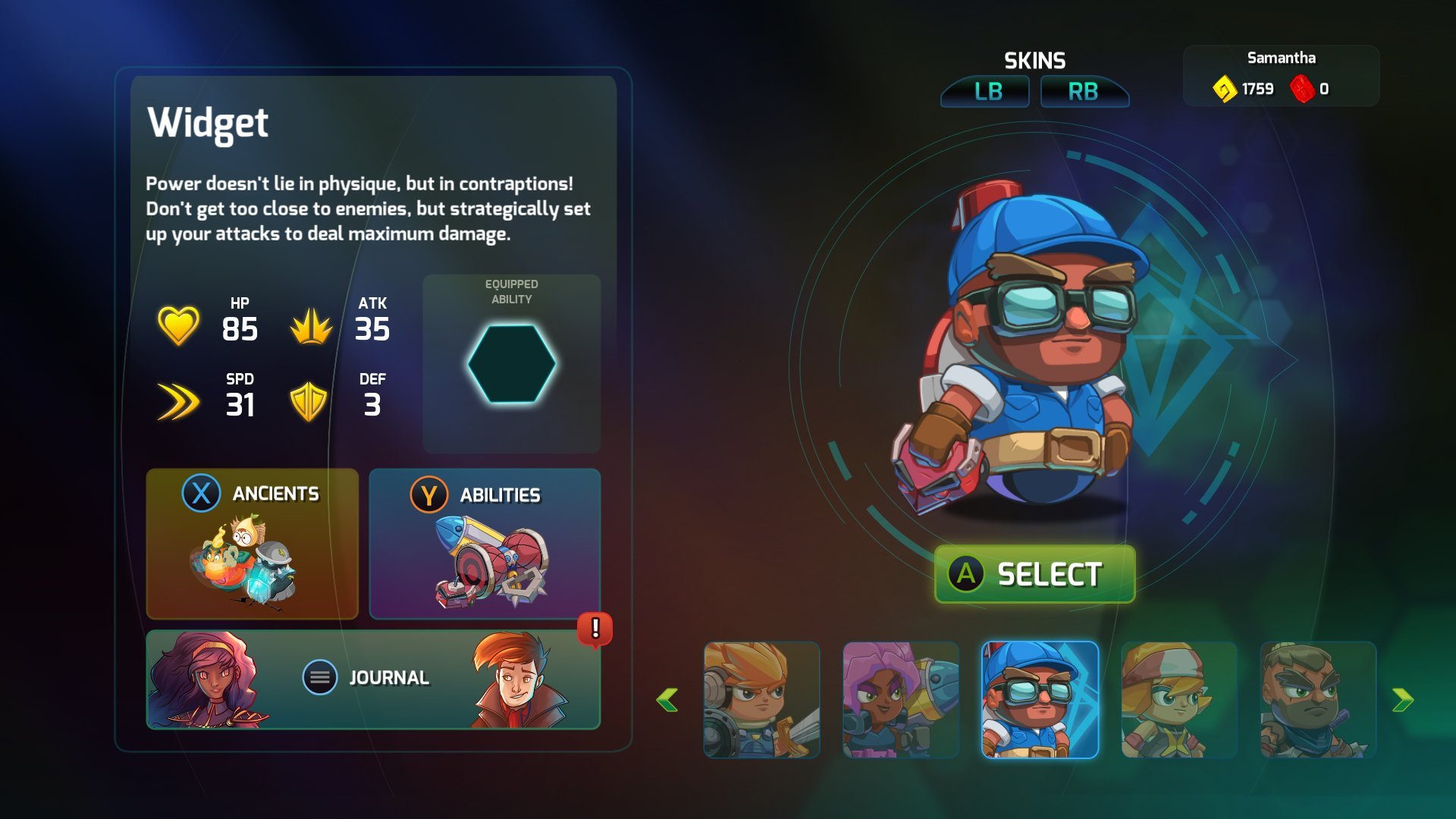 That being said, I don’t know how much I care for the idea of an always-online brawler. I suppose internet is becoming better every day and we already have interconnected lives, but if the servers close down or this game fails to take off, you’re not really going to get much mileage out of it. Creating your own instance from scratch is cool, but it’s almost overbearing with its difficulty and it would be a bummer to never actually finish anything should a community not rise.

Then there is the prospect of cross-play, which isn’t yet confirmed for Next Up Hero. I spoke with Joe Tringali, the game’s director, about that idea. He’s all for it, but doesn’t know what the plans are just yet. Since we all know about Sony’s stance on the matter, it’s unlikely we’ll ever see the PS4 version working with everyone else, but Joe isn’t going to stop trying. At the very least, the PC version will work between Linux and Mac, so that is a start.

At least with cross-play, the always online requirement won’t come off as a harsh restriction. If the game fails to sell well on one platform, having it cooperate with another five will definitely bolster its value. I had a ton of fun with the demo, though, so I don’t think a lot of people will be too upset about the stipulation.

The game just feels fun to tinker around with. The colorful visuals, smooth gameplay, and neato concept should provide quite a bit of fun when it officially launches. I’m not totally sold, just yet, but I’m optimistic.