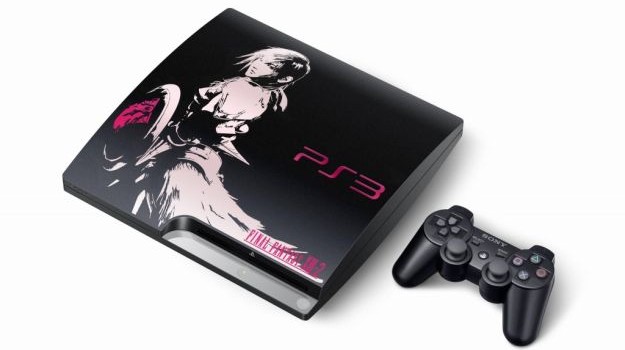 The Final Fantasy XIII-2 train has been chugging since January when it announced its existence to the world with a logo, a screenshot, and a teaser trailer. Ever since then there’s been more and more screenshots, all of which are very pretty, but we all know that it means squat unless it’s backed up with substance. However, opinions among the Destructoid staff over time have varied — from Hamza’s cautious preview a few months back, to ecstatic Dale’s highlights from TGS.

Well now it seems to have jumped on the limited-edition PlayStation 3 bundle bandwagon, recently announcing a special commemorative 320 GB PS3 for sale in Japan, making it the third special console since May, after Tales of Xillia and Ni no Kuni.

The bundle is being called the “PlayStation 3 Final Fantasy XIII-2 Lightning Edition Ver.2″ (where “Ver.1” was the white console announced for the first game), and is a black PS3 with a white portrait of Lightning sporting her new armor plastered across the front, and dashes of Dale’s favorite color pink on her shield, the PS3 logo, and the game’s title, situated by the disc drive.

It also comes bundled with a copy of the game, altogether coming to a total of ¥37,960 yen (about $495 USD), and is due out on December 15 in Japan. Needless to say, the console is exclusive thus far, and will probably stay that way.

Still, I’m sure there are fans out there who would want this. Or has the last game really killed all buzz for Final Fantasy now? Also, do any of you wish that more of these special limited edition consoles be released here? Or are you content with bundles like the recently announced Uncharted 3, where no console paint jobs exist, and in exchange we see game/PSN bonuses from time to time?