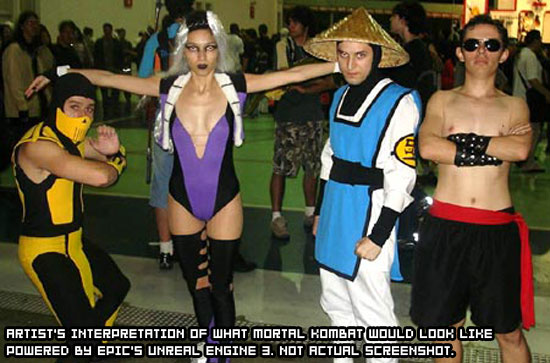 It’s already been confirmed that the next iteration of the Mortal Kombat series would be powered by the Unreal Engine. One can assume Midway’s upcoming fighter would makes its way to at least the PlayStation 3 and Xbox 360, but Mortal Kombat has rarely blessed the PC marketplace.

But according to a listing over at Epic Game’s official Web site, the title (tentatively called Mortal Kombat 8), will be making its way to all of the usual suspects, as well as the PC. We’re not going to even bother Midway about this one, as its unlikely we’ll hear much of anything until early next year. But with Unreal Engine 3 being native to a PC environment, it’s not that crazy of a notion.
Speaking of crazy notions, though, have you guys heard this rumor that the next Mortal Kombat game is going to be versus crossover with DC Comics? That’s as crazy as Metal Gear Solid 4 coming to the Xbox 360! What will they think of next?
[Via Mortal Kombat Online]