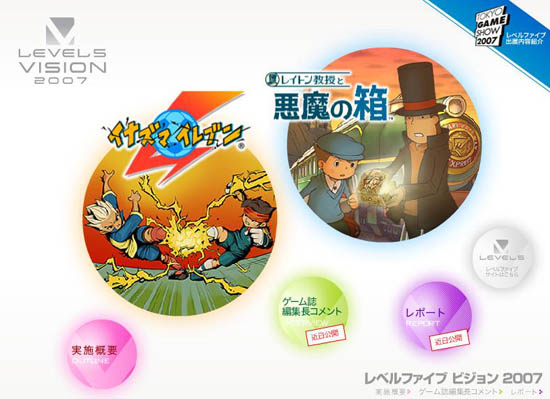 Japanese developer Level 5 (Dark Cloud series, Rogue Galaxy, Dragon Quest VIII) is quickly moving up in the public eye with the recent launches of successful titles. They’re making the games that people are enjoying, always shoveling them full of TLC. What’s more is that their upcoming titles are ones that gamers want to get thier hands on.

Does that sound familiar? It reminds me of Square in their heyday, and apparently I’m not alone, as Next-Gen’s Tim Rogers (a fellow game music freak) is coming out and saying it in his article called “Japan: Level 5 the Next Squre Enix.”

He cites the polish and craftsmanship of new titles like Professor Layton and the Devil’s Box and soccer RPG Inazuma Eleven, both of which were shown off at a media even earlier this week. We’re also reminded of the title that no one forgot about, White Knight Story (Shirokishi Monogatari), which Sony will be showing off at TGS this year.

Speaking of TGS, Level 5 will have a booth there (check their pre-TGS Web page), and they will be handing out DS cartridges of Inazuma Eleven to those who wait in line to play Professor Layton and the Devil’s Box. It’s not like we needed a bribe to wait in line, but we’ll take it!

With these titles, the upcoming Dragon Quest IX, and alliances with Nintendo, Sony, and even Square Enix, it is obvious that Level 5 is going somewhere. Let’s hope they stick to fresh, new material, and don’t get caught up in making countless sequels and spin-offs like some other company we know.