This is the future

I have seen the future, and I’m here to tell you that it’s a bit different from what you’re probably expecting. Actually, I’ve seen two different futures. One is Infinity Ward’s version of our country’s future, in which America is crippled and our government in disarray. We’re now the underdogs, fighting a war against superior forces. This is the setting for their latest, Call of Duty: Ghosts.

The other future I’ve seen is the that of console videogames. Call of Duty: Ghosts is our first real look at what we can expect from the PS4 and Microsoft’s upcoming system. No crystal balls or concept art here — we’ve seen real next-gen gameplay and the technological advancements that make it possible.

As scary as the future may be in both cases, we’re looking forward to it.

As you’re reading this, Microsoft is likely unveiling their next system. And while Activision didn’t come right out and say it during this preview event, they let us know in so many words that what we were seeing was next-generation gameplay, just like you might experience on a PS4 or the new Xbox. I suspect we’ll hear that this preview you’re about to read is from Next Xbox footage, and if that’s the case, it’s safe to be excited about next-gen.

Fans of the biggest videogame franchise are going to want to see what makes next-gen so much better than the current one. My first impression is that the difference is subtle and lies more in the details. From what I’ve seen, the first Call of Duty for the upcoming consoles doesn’t do as much for gameplay as it does for graphics. That’s not a bad thing, mind you, and I’m sure we’ll hear more about gameplay advancements in the coming months. They’re just showing off the shiny first, which makes sense.

Gamers accustomed to high-end PC graphics may be used to looking for the details, so they’ll instantly notice the high-resolution textures, high asset count, fancy particle and lighting effects, and fine polish. Your casual gamers will just lose their shit and then go put their pre-order money down on their next console. Ghosts looks to be about what I expected: a really great-looking PC game running on a high-end rig. 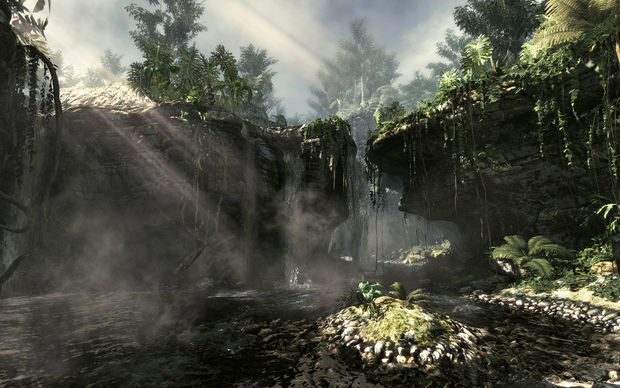 Ghosts uses some internally developed technologies to bring that aforementioned level of polish to the screen. They took talent from Hollywood to incorporate the film industry’s SubD tech into their game. This allows the visual fidelity and polygon count to increase in realtime as you move closer to the object, meaning that jagged edges on objects like your gun scope are perfectly smooth and round. In-engine wireframe demonstrations showed the effect toggled on and off. Off, you could could count the polygons on a gun scope; on, it looked to add thousands of polygons to just the scope alone, making it round, smooth, and realistic looking. SubD is used on everything from the weapons to scenery, and seeing the differences in the toggled examples was like night and day. Plain, blocky objects are taken by the engine and beefed up in realtime: impressive stuff.

Examples of displacement mapping were also shown off and were equally impressive. An in-engine scene showing a rushing riverbed in the mountains looked positively photorealistic. When the displacement mapping was turned off, fine details like riverbed rocks became a flat texture. The textures on cliff walls and in the river implied a lot of geometry, but they were actually flat. With wireframe on and displacement turned back on, we could see tiny polygons popping up everywhere, altering the texture to have more depth. The game engine uses these textures to create geometry, taking textures from flat to realistic.

This and one other demonstration showcased many additional technologies, including HDR lighting, iris adjustment, volumetric lighting, self-casting shadows, specular mapping particle effects, and more. The technological terms don’t mater. What matters is that vistas looked real. In side-by-side comparisons with similar scenes from Modern Warfare 3, well, I wanted to sell my current-gen console. Weapons, environments, and even the player’s arm showed such a leap in quality over current generation games that I now feel like I’ve been underestimating next-gen gaming. Oh, and all of this is running at 60 frames per second. 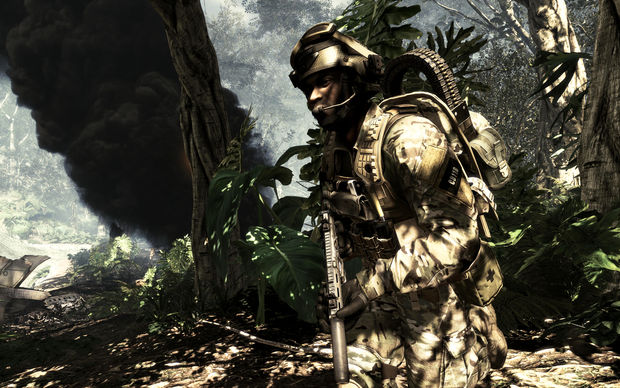 IW did touch on some gameplay enhancements after showing off the visual tech. There’s a new mantle system as well as a new lean-in/lean-out feature. You can also slide to get out of the line of fire, which looks really cool.

They’ve also revamped multiplayer, though they didn’t go into much detail. We do know that maps are now dynamic, so expect events like earthquakes and floods to change the terrain. There’s also character customization, so you’ll be able to choose heads, bodies, helmets, gear, and more, with much more depth than in the past.

One new addition is especially cute: a dog is now part of your squad. He’s not just a tool, either. He’ll work for you, sniffing out explosives and such, and you’ll care about him. I’m not kidding about how cute he is, either.

Seeing all of these in-engine examples and demonstrations was one thing, but seeing actual gameplay had much more impact. Activision called it a sneak peek and told us that we’ll see the full shebang at E3 during Sony’s press conference. But this sneak peek was good enough. 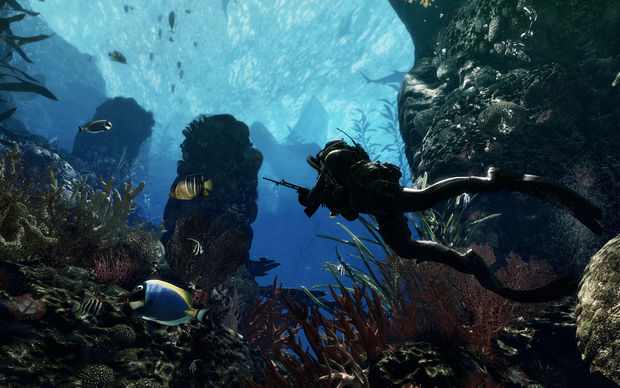 The live play takes place during an underwater dive. One other squad member pushes through the water in front of the player, moving past chunky coral and impossibly realistic looking schools of fish. The light filtering from above down through the seaweed and bubbles looks straight out of a Hollywood movie.

The player passes through wreckage (you can even see his hands, as if swimming) a bit before encountering enemies near a downed ship. An underwater firefight takes place as craft probe headlights move in the distance.

After a bit of a time skip, the two swim faster through some wreckage as the water shakes — it seems depth charges are coming from above. The lighting from the explosions is fantastic, but they’re nothing compared to the underwater missile that the player guides to a ship. The explosion is massive and highly cinematic, but there’s no time to appreciate it as some kind of suction has been caused by the explosion. The player is caught under the wreckage, hand bleeding and air tube waving freely in the water. The demonstration concludes but the scene does not resolve as the two swim frantically past falling metal debris, underwater gunfire, probes, and now larger ships overhead.

In a word? Impressive. The in-engine demos, the gameplay, all of it. Very impressive. And if this entire presentation is what they call a tease, they must have much more to show of Call of Duty: Ghosts. We all probably have a picture of what we expect next-gen console gaming to look like. I didn’t expect that finally seeing it would actually beat what I was imagining, though. It’s a tough place to be in to be the very first out of the gate, but it looks like Infinity Ward is absolutely ready for the future.