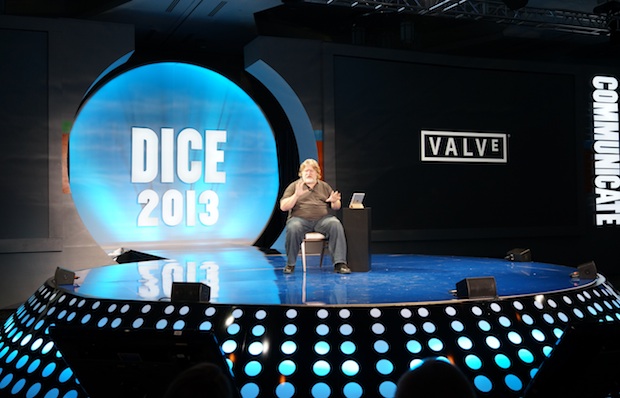 At Valve boss Gabe Newell’s D.I.C.E. Summit keynote this morning, he ran down what he feels are three separate but complementary segments for PCs in the living room. Valve believes that the openness of the internet and PCs are what’s best for the gaming industry. PCs in the living room will be key for getting away from what he calls the “disruptive console cycle.”

Good — Newell believes the entry point for PC in the living room is inexpensive — likely less than $100 as a separate product, but potentially free if you already have the hardware in your home. Solutions include smart televisions and streaming. Soon, televisions will feature streaming from gaming PCs to the living room as a standard feature. Newell admits that there are still issues to figure out, like connectivity and audio synchronization.

Better — The better solution consists of PCs in console form factors, priced at console price points. Valve is already working with hardware vendors to explore this segment, with their goal being the creation of boxes that have the characteristics of a great console PC, but also possessing the ability to take advantage of the openness of PC.

Newell feels that Apple is a bigger threat than console makers to PCs moving into the living room. Apple’s faster, smoother upgrade cycle and large unit advantage keeps the pressure on.

Best — The best solution for PC gaming in the living room already exists — high-end gaming PCs. Endlessly upgradable and configurable, most modern PCs already contain everything needed for connection to a living room television. Newell says that if the user interface  experience is solved, the hardware is certainly available to make for a great PC living room experience

Again, Newell things that these segments are complimentary, and not competitive. For example. a user coming in at the ‘good’ tier might have a great experience, which would make moving to ‘better’ or ‘best’ easy. With the internet embedded in people’s lives now, social connections, medial libraries and applications move easily across all three.