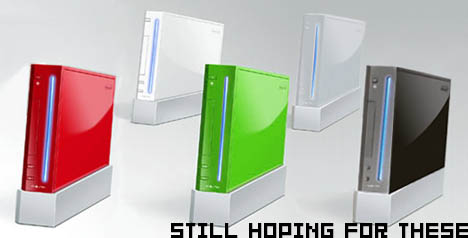 No, I’m not off my rocker. I totally made the second half of that headline up, inspired by tipster and Podcastle regular Wardrox, who jokingly claims that it might also include Metal Gear Solid 4. All of us are full of sh*t here at Destructoid, but if Neowin isn’t, then there is a new Wii SKU on the way.

They say that the current stock is under an “early warning” status at one major American retailer. I have no idea what that means, but they say it has something to do with one SKU being phased out and replaced by another.

A trusted source with access to internal documents has given Neowin this exclusive story. It remains to be seen whether this development is due to new bundles being released or perhaps coloured versions of the Wii, but the current SKU will definitely begin to be removed from sales channels within 90 days.

Just to check, I asked a retail buyer (from a major American retailer) if they could make any sense of this “early warning.” They told me that this is not an industry standard term.  Furthermore, a new SKU doesn’t necessarily equal a new product. Last time we heard this, it was a change to include the “Wiimote condoms.” What a letdown!

Still, it’s something to keep an eye on. Just don’t get your hopes up about Blu-ray, let alone DVD… or even MGS4.