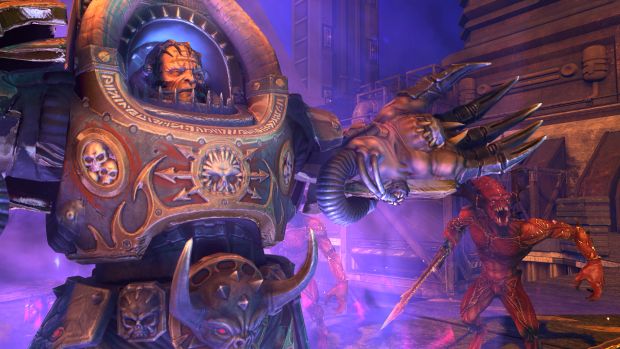 THQ showed off Warhammer 40,000: Space Marine once again but this time the demo wasn’t playable. It was a lot more polished visually compared to what I saw last time, otherwise I won’t reiterate much since you can simply read my last preview. The basic is that you’re a super powered solider and combat is pretty seamless between the third-person shooting and melee action.

Developer Relic Entertainment did at least show off a one new thing: jetpacks! The Space Marines were able to equip jetpacks in the particular level being shown off and saw the main character flying around to get to enemies located higher up in the level.

You can expect Warhammer 40,000: Space Marine to be released September 6 on the Xbox 360, PlayStation 3 and PC. There’s going be a collector’s edition you can pick up as well which will include a 10″ replica Purity Seal, hardback art book, soundtrack and 25 foiled character information cards. The CE version of the game will run $79.99.

Check out the new developer diary and screens in the gallery. We’ll have more hands-on impressions come E3.