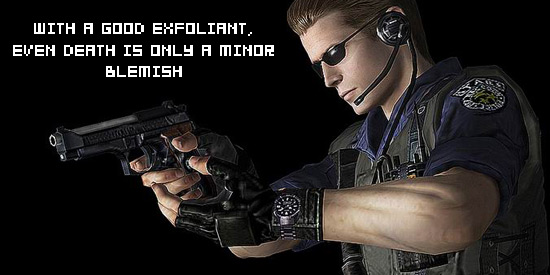 This thread over at NeoGAF contained the high-res images in the gallery below.

The two scans show images from the latest issue of Famitsu covering the upcoming Resident Evil: Umbrella Chronicles. While there isn’t a ton of new info, the Japanese text that none of us can read apparently reveals Wesker as an unlockable playable character which, after his death, is a somewhat confusing development. Then again, we’re dealing with a universe in which women fight zombies in mini-skirts and George Romero was crucified, lay in a tomb for three days and rose from the dead to absolve humanity for their sins.

Then again, I always wondered what happened to Tofu. If Wesker gets an extra life, why can’t we have some closure to the plight of the finest soy-based soldier since General Joshua Lawrence Chamberlain?