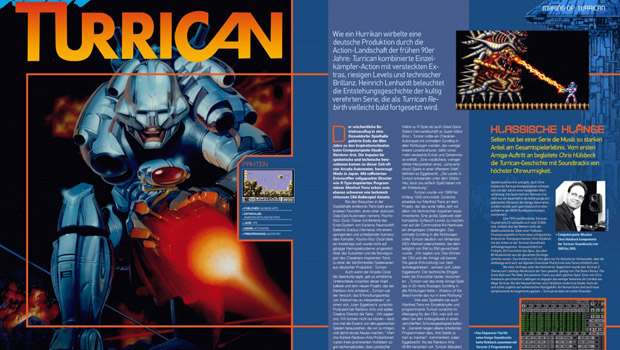 The classic Amiga game is set to be reborn

In the newest edition of the German “Retro Gamer” magazine, a complete retrospective of the legendary Turrican game series also delivers some very exciting news for fans of the long lost silver–armored hero. According to the article, a brand new Turrican adventure is being planned and is in the early stages, with the title of the game being revealed as Turrican Rebirth.

There’s not a whole lot of information disclosed on how and when the game will released, but what is revealed so far is that the game will be proper 2D, with development hopefully starting up soon this year. The plans are also to make the game highly customizable for the players, with the ability to craft their own weapons and stages to be shared online. No word yet if Chris Hülsbeck has been approached to score the game but it’s a pretty sure bet he will, considering the timing with his own Turrican Soundtrack Anthology being on its way. An interesting piece of information is that the right holders have been in contact with Black Forest Games, creators of Giana Sisters: Twisted Dreams, but nothing is set in stone yet.

For those of you in Germany, the issue holds a ton of interesting tidbits on the series and is well worth checking out, from stories about a never before seen director’s cut Super Turrican game, new information on the cancelled Thornado and also details on a PS3/360 re-imagining that never came to be due to lack of interest from publishers.