The abrupt and unexpected posting of art from the new Teenage Mutant Ninja Turtles game was unsettling last week. Aside from the uncanny caricatures themselves, there came a flood of remembrance; for example, that Michael Bay is still helming a live action TMNT movie in which the titular turtles are space aliens. I assume because the turtles undergoing mutation is far too unrealistic? Or less bombastic. After all, an asteroid crashing into earth carrying space turtles is more…explosive.

Between Bay’s upcoming mess and a new animated series on Nickelodeon (which I hear is good!), the turtles are making their regular resurgence. Remember the CGI TMNT of five years ago? The grittier TMNT cartoon of 10 years ago that ran for an impressive 6 years? For whatever reason, the turtles stick around. TMNT Out of the Shadows is part of an Activision effort to profit from this resurgence. Despite the guttural hiss that name evokes, I’m approaching the game with tempered optimism. I’ll probably regret it. 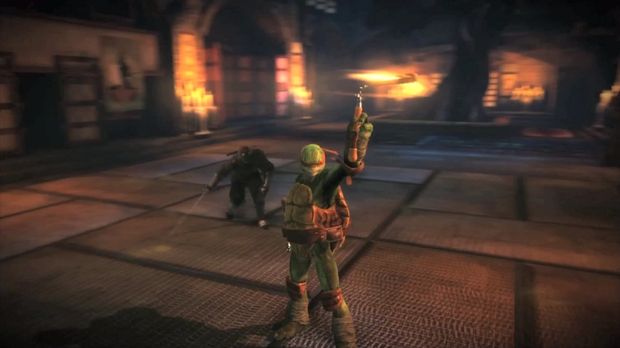 Much like the original comic, Out of the Shadows is a grittier, urban wasteland rendition of the turtles. Cues were taken from the recently popular (and, again, supposedly good!) Nickelodeon series, but you can see Red Fly has taken bits and pieces from where it likes and blended them into its own unique look. I’m surprisingly okay with Nickelodeon’s Kung Fu Panda styled aesthetic, but the more reptilian look fits this hard-edged action game.

The best thing Out of the Shadows has going for it is its cooperative play. One to four players can play online and one to two players can play locally thanks to simply drop-in drop-out play. The reason for this is that all four turtles are always on the screen at once. With the D-pad, players can quickly swap between Leonardo, Michelangelo, Donatello, or Raphael. Of course in cooperative play you won’t be able to switch to an occupied shell.

Swapping between characters allows for a lot of coolness. The feature can be used to extend combos for greater damage or to perform team attacks, as well as diversifying play, as each turtles has his own distinct fighting style. Leonardo, sticking to the boring necessity of his character, is rather balanced. The leaner, gangly Donatello is a bit slower, but features the greatest reach and a kung fu influenced style. Raph has the least range, but is the hardest hitter, which a surprisingly nasty, almost MMA-styled moveset that incorporates knees and elbows. Mikey is the fastest, good for mashing buttons with his capoeira-tinged movements. His taunt is also him sticking his tongue out, which is great, though not as great as the group hi-five. 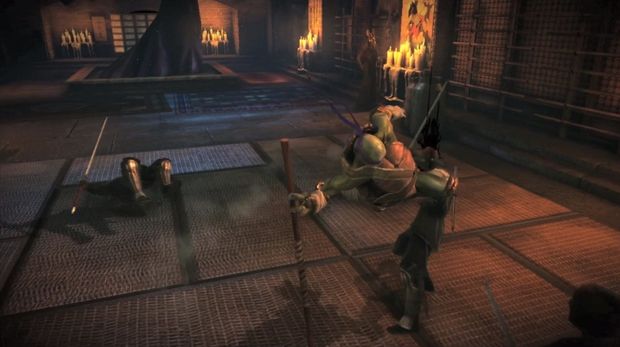 I was shown the first area, a small, closed off slice of urban back alleyways that was rain slicked and boasted some impressive looking glowing neon signage, which is a weakness of mine. It looked rather Arkham Asylum-inspired, albeit on a miniscule scale. I’m told it’s one of seven different areas that the game will feature.

Additionally, there is the Turtles’ sewer HQ, which serves as a player hub. From here, you can pick missions to advance the story or go into the practice room and take each turtle for a spin to learn their idiosyncrasies. You can also head to the single-turtle challenge room and compete on online leaderboards. There’s also a mild progression system and hidden weapons for each turtle that changes the game.

From there, I was shown some combat against Foot soldiers. Aside from the differences in styles, each character boasts an impressive number of individual moves, including unique special moves that can be accessed through a chargeable meter. I’m surprised by the amount of depth that combat system seems to have and how well it responded. The enemy AI was a bit sluggish and dopey, but this is also pre-alpha, so the combat to be working as well as it seemed inspired a tinge of hope in this cynical heart. 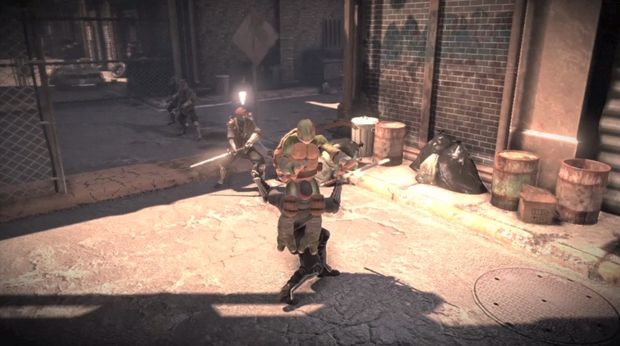 That’s the biggest fear, though. Out of the Shadows is shooting for an undefined summer release, but it’s still in pre-alpha presently. Given the recent disaster known as The Walking Dead: Survival Instinct, it’s hard to imagine Activision giving the team enough time to get everything properly worked out. Not that I think it’ll be as much of a mess as Survival Instinct, mind. Even in pre-alpha is looks superior. But the Bay film doesn’t even come out until 2014. I feel like Activision could afford to give the title a bit more time.

Still, what I was privy to is promising, even if I’m terrified the end product won’t live up to the lofty expectations set by Teenage Mutant Ninja Turtles: Turtles in Time and general license appreciation. I think fan-filled Red Fly is trying to do right by the license, with its CEO throwing employees around for animation purposes or with the office-sanctioned nunchuks. We’ll see what the result is this summer. Can’t be worse than the eventual Bay film, right?