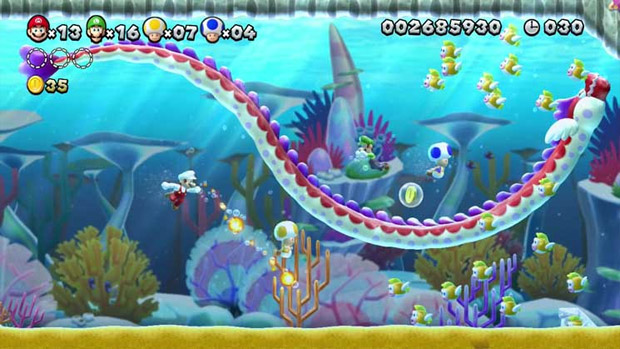 This trailer has me feeling much better about New Super Mario Bros. U. Not that I was feeling great about it before. There are things to be excited about, like the new modes (Boost Rush and Challenge), Flying Squirrel Mario, and, of course, baby Yoshi. I’ll play it and have fun, even if it’s not a revolution.

I was under the impression that placing blocks into the world by way of the Wii U GamePad wasn’t necessarily mandatory. From the looks of it here, it’ll be needed to access certain collectibles based on how they are placed in the levels. Hmm.

Yes, I’d still really like a return to the era of Super Mario World, or even just a 2D game with the creativeness of the Galaxy titles. But I don’t see that happening for a while, and I’m willing to be thankful that New Super Mario Bros. U looks at least partially different from prior installments. Those backgrounds!