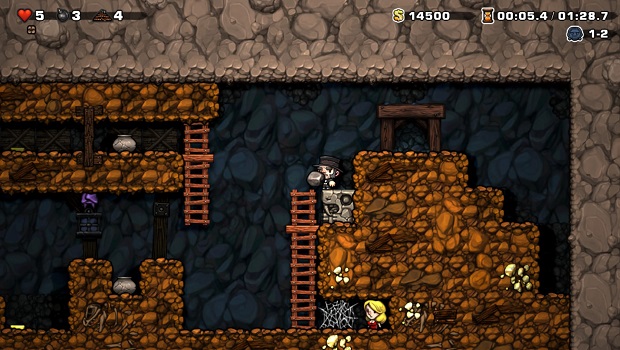 As you might know, Spelunky has been my videogaming obsession over the last six months or so, therefore it’s no surprise that I’m actually keen to read through patch notes for the game. Version 1.4 has gone live and the big addition is the new Pro HUD mode that greatly reduces the size of things like the health meter, bombs, and ropes and adds new timers to show how long your run has been.

That’s something people have been clamoring for as the HUD and item counters were quite obtrusive, especially when you couldn’t see one of those dammed spiders about to drop on your head. I’ve no interest in streaming my games (y’all don’t want to see a semi-sober Scottish guy be really bad at Spelunky, do you?) but after a quick test run I can say that I really like the new minimalist HUD.

Of course there’s assorted bug fixes and updates, almost all of which I’ve never even realized that were a potential problem. Did the skeletons really need to make a different sound when you jump on them? Not really but there doesn’t seem to be much here that’s going to make a difference to how I play; now here’s to another 190 hours!