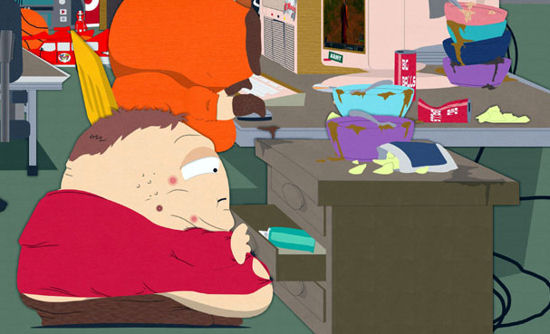 Gaming has featured in quite a few episodes of South Park, with the PSP, Wii, World of Warcraft and of course Chinpokomon all making appearances. Parker and Stone are set to return to gaming in a new episode from season 11 which features Guitar Hero.

Considering the popularity of Red Octane’s musical franchise, it’s hardly surprising that the South Park team would eventually jump on it, cannibalizing yet another fragment of popular culture for its social satire. In the episode entitled Guitar Queer-O, Stan and Kyle become addicted to the game, but Stan’s l33t guitar skills cause tension between them. Cue a message about how apathy is the best way forward and how everybody is stupid. Seriously, South Park is better than everything else on American TV that isn’t Drawn Together.

As if I needed any more reason to hail Parker and Stone as veritable Gods of social commentary, the fact that they might very well know their videogames just sweetens the deal. Hopefully this turns out to be one of the better episodes, the gaming ones are usually spot-on.