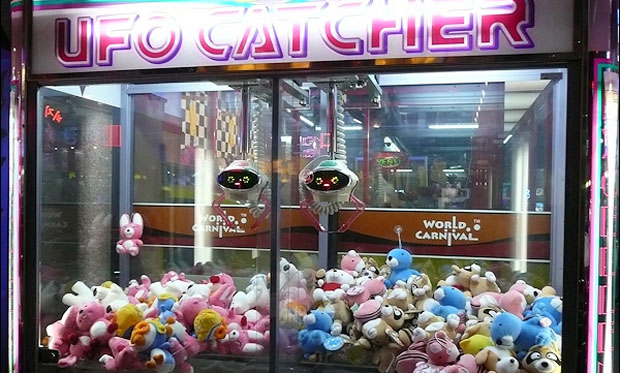 No, not Unidentified Flying Objects. We’re talking about “crane games” here. Anyone that’s played them knows how much of a bitch it is to actually nab something with the claws. My advice? Look for loops to hook into, and think about nudging rather than lifting.

An advantage even better than my sage advice will come to visitors of a new Japanese Sega arcade. At the soon-to-open Sega World Kokoe Amagasaki, UFO catcher players will actually get to handle sample prizes before playing. This will let them devise strategies by giving them an idea of how the prize feels. They’ll also get some idea of where to draw the line at credit insertion. For example, if it’s a junk plushie, you know to stop at $5.

You know one I see all the time in Japan that’s not worth going after? A big-assed bag of chips. After about 2 credits, you could have already bought your own non-stale bag.