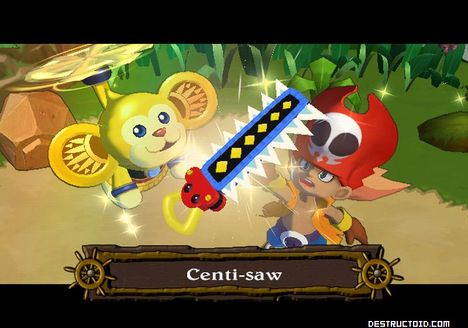 Our pals at Capcom have sent over some new screens of their upcoming Wii title, Zack and Wiki: Quest for Barbaros’ Treasure. This is the game that was formerly known as Treasure Island Z, which I thought was a perfectly good title; the game contains treasures, an island, and the its lead character’s name starts with a “Z.” I was all so perfect and oh so much shorter than Zack and Wiki: Quest for Barba — crap, that’s long.

The game follows the adventures of fledgling pirate, Zack, along with his little flying mouse/cat/monkey friend you see in all of the screenshots, Wiki. It appears that Wiki can turn into some sort of magical bell with which Zack can use to … call people to dinner. I don’t know.

The game will be out sometime this fall, only for the Nintendo Wii (until it gets ported to the PlayStation 2 and PSP).