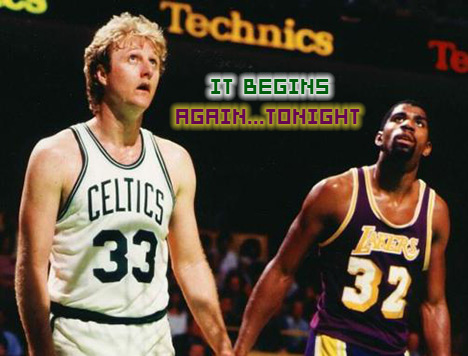 The Lakers-Celtics rivalry is one of the most hotly contested ones in basketball history, and though it has been relatively cool since Larry Bird and Magic Johnson (see image above) retired in the early ’90s, it’s about to heat up once again as the teams face off tonight in Game 1 of the 2008 NBA Finals (9 PM ET, ABC). I mean, hey, now that LOST is over, you’re not doing anything with your Thursday night, right?

Just like they predict Super Bowls with Madden games, EA has simulated this year’s Finals using NBA Live 09. The videogame has sure come up with one doozy of a series. The Celtics took Game 1, while the Lakers won Games 2 and 3; after the Celtics tied the series in Game 4, the Lakers went up 3-2 in Game 5. The Celtics were able to force a Game 7 with a thrilling buzzer-beating win in Game 6, but all their effort was for naught; the Lakers were victorious in the end.

Of course, it turned out that EA was wrong when they picked the Patriots over my Giants in this year’s Super Bowl, so you might want to take this with a grain of salt before giving your bookie a call. Either way, EA sent over a screenshot from each of the series’ seven games along with the press release (after the jump). NBA Live 09 will be out on October 7th, which makes you think — how’d they even do this when the game’s not close to being done?

EA SPORTS™ NBA LIVE 09 has predicted that the Lakers will capture their 15th NBA Championship by defeating the Celtics in the 2008 NBA Finals simulation. In a historic matchup that was last seen 21 years ago, the series lived up to its billing in a seven-game thriller. It was NBA Finals MVP Kobe Bryant who led the charge, averaging 29 points and 6 assists per game throughout the series. With this victory, Phil Jackson set a new record by winning 10 NBA Championships as a coach. The Finals tip off this Thursday at 9PM EDT on ABC. NBA LIVE 09 will be in stores on October 7, 2008.

Recap – The Fleet Center erupts after an exciting Game 1 of the NBA playoffs. Kevin Garnett leads his team in scoring and offensive rebounds. Also a monster on the defensive side of the ball, Garnett’s blocking rampage is reminiscent of the Bill Russell era.

Recap – An uncontested Kobe Bryant slam dunk sets the tone early in the first quarter. Kobe and the Lakers never relinquish the lead resulting in a 6-point victory and more importantly, a split of the first two games in Boston.

Recap – Paul Pierce has a big game but doesn’t match up to Kobe’s near triple-double performance. Kobe’s dazzling dunk rejuvenates the Lakers and the fans at the Staples Center. The momentum shifts towards the Lakers after taking Game 3.

Recap – Ray Allen leads the Celtics to an important victory in the Staples Center. Allen’s strong perimeter play gives the Celtics a strong lead early in the 4th quarter and ties up the series.

Recap – The battle in the paint is the focus for much of Game 5. Rebounding is the key to the Lakers victory. Gasol outrebounds Celtic muscle-man Kendrick Perkins. Gasol also takes a page from Garnett’s Game 1 performance by blocking five shots, and keeps his number one rank as the leading shot blocker in the 2008 NBA Playoffs.

Recap – The Celtics, led by a strong performance from Paul Pierce, overcome the Lakers to force a Game 7. Pierce goes shot for shot with Bryant, tying him in points, and rounds out his game with four defensive steals.

Recap – The Lakers win their 15