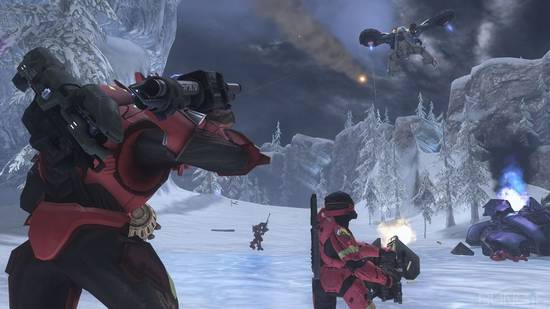 The new Legendary Map Pack is coming out next Tuesday for Halo 3 and Bungie has shown off some new screen shots of some battles taking place in all three maps. Don’t you just hate it when they show off a guy with the flaming head? Anyway, Avalanche looks to be easily my new favorite map of Halo 3. I’m just really curious as to how balanced this map will be though. I know the Hornet is now gimped, but it could still be a very over powered tool of destruction. For more of the new maps, check out the video Gameboi posted a few days ago.

Bungie will also be previewing the new Blackout map this weekend at MLG Meadowland in New Jersey. People going to this event will be among the first to get their hands on this new map before it’s officially released. For times and dates of the MLG event, check out MLG’s Web site.

[Thanks to Ben for the MLG tip!]