I’ve made no secret of the fact that JRPGs are burning me out lately. I’ve been unable to get excited about a Japanese console roleplayer ever since Infinite Undiscovery, a game which more or less ruined the genre for me by magnifying every bad cliché’ that exists, to the point where it’s now all I think about when I think about JRPGs.

For someone whose imagination was captured by Final Fantasy games and who once considered himself an RPG devotee, this is quite sad indeed. The last console RPG I truly loved was Lost Odyssey, and before that, Dragon Quest VIII. In a few years, only a handful of console RPGs I could care about, and a whole lot of garbage.

I also sadly don’t have time for 40+ hour long RPG experiences anymore, unless they are truly exceptional. As gamers get older, have families, and acquire demanding jobs, it stands to reason that JRPGs will get knocked on the head. It’s very sad, but also very true.

However, while I lament and whine about my love for JRPGs dying, I completely ignored the fact that I’ve been playing and loving them this whole time. It’s just, I haven’t been anywhere near a console when I did it.

This is why I demand there be a new rule — every JRPG must now be portable!

The DS is already home to countless JRPGs, and the PSP had a fair few games itself. While I get less and less enthused about upcoming console roleplayers, unable to be wowed by dazzling graphics when I know it’ll just be grinding, rubbish storylines and shit voice acting, every time I hear about a new portable RPG, my ears perk up. On a home console, JRPG over saturation is frightening, since you can only really handle one of those projects one at a time, and that’s what a JRPG is at heart — a project. Not so much a game, but an ongoing plan of action that one must commit to in order to reap enjoyment.

For me, a project is difficult to do when I sit in front of the TV, ready for a dose of instant gratification. I’m no longer a child, amused by simplistic repetition, and sitting to level grind in front of a TV for several hours at a time just doesn’t work anymore. This is the first benefit to RPGs on the DS and PSP. Portable formats are perfectly suited to the “chipping away” nature of level grinding. A few battles on the way to work, a heavy grinding session during a boring cross-country trip. When I used to have a “real” job, I’d take my DS to work and snatch a quick battle in Final Fantasy III in between phone calls. The nigh-impenetrable Disgaea was so much more digestible on the PSP for this same reason, too.

Thanks to portable RPGs, I now relish otherwise dull flights to events or lengthy interstate drives, because it gives me a chance to get absorbed in another JRPG. What once presented itself as work on a console is now a fun portable project, or at the very least a handy “time-travel” device that keeps one occupied on a trip so you don’t realize how long you’ve actually been on the plane. This is a huge reason why portable JRPGs kick the shit out of console ones. 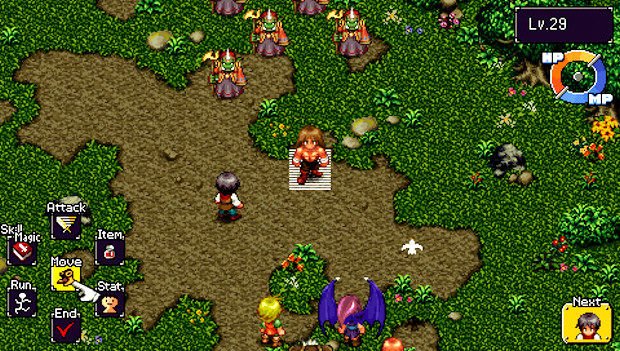 Another handy reason why RPGs are better on portable platforms is the fact that there is usually a lot less voice acting, thanks to limited file sizes. While Suikoden Tierkreis is currently hurting my ears with its high-pitched, line-blurting nonsense, at least the developers had to pick and choose when to use it, rationing out the voice acting so sometimes you get the blessed relief of silent text. Also, with far less reliance on cutscenes, one can scroll through the words, allowing the player to read ahead of the voice acting and skip to the next piece of dialog before particularly annoying characters can finish speaking. Being able to read the dialog myself and cut certain shitty voice actors short has saved my sanity over the years of DS roleplaying.

Frankly, I think videogames have reached a point where if a developer cannot be fucking bothered to pay for voice actors who can act, they shouldn’t bother having spoken dialog in the first place. However, that’s never going to happen, so it’s yet another reason why portable RPGs win out.

Another point is the graphics. Let’s face it, most JRPG fans have old school sensibilities, it’s the only way they can keep enjoying a genre that’s barely evolved in over twenty years. I can only be wowed by “next-gen zomg” graphics so much, and typically if a game has focused too much on how a game looks, they’ve often forgotten about how the game plays, or how enjoyable the story is. Many console JRPGs are graphically gorgeous, but so dull in other areas that it barely matters. At least with the humble graphics of the DS and even the PSP, developers have more time and resources to focus on other things. Besides which, pixel art can be simply beautiful, and most JRPGs just look much better when represented in such a style. Storyline was once the important driving factor of an RPG, not graphics. Handheld RPGs seem to remember this a lot more. Even PSP RPGs tend to stick to sprite-based art.

I’m certainly not saying that reduced graphical focus always leads to better storylines. Far from it, the DS and PSP are home to plenty of shitty plots and bad writing. However, the portable format again wins through here, making awful writing all that much more bearable. When I sit down in front of a television, I have an expectation in mind. I have set aside a number of hours which I’ve committed to a videogame, and I expect to be entertained in return. With the DS and PSP, there is far less commitment. You drop in, drop out, and this makes bad writing much more bearable. While a truly stellar story will always be far more welcome, a rubbish one is easier to accept. 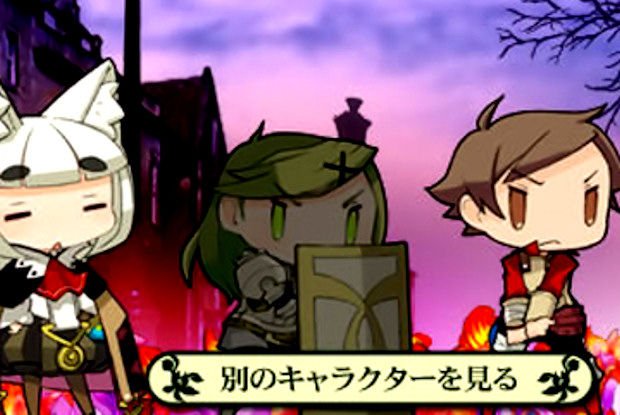 It’s safe to say that there is a definite perceived decline in Japanese RPGs. Once a king in the hardcore gamer realm, the continued efforts of tri-Ace and other developers who don’t know how to make a good console game have helped to steep such games in disappointment and cynicism, to the point where even Final Fantasy XIII is struggling to keep people excited. It is earning itself a reputation as a pompous genre, a decaying and irrelevant member of the old guard, dressing itself up in a ruff and feather and preening itself as if it were as important as ever.

On the DS and PSP, however, JRPGs are are fresh-faced and hopeful as always. Even though they do very little different from their bigger brothers, these handheld RPGs just feel better, for all the reasons I’ve provided. Maybe they are just better at hiding the same old worn clichés, but if they can at least create the illusion that JRPGs haven’t all turned shit, then I’ll gladly suck down that placebo and enjoy myself. From now, on, upon pain of death, all JRPGs must now be portable.