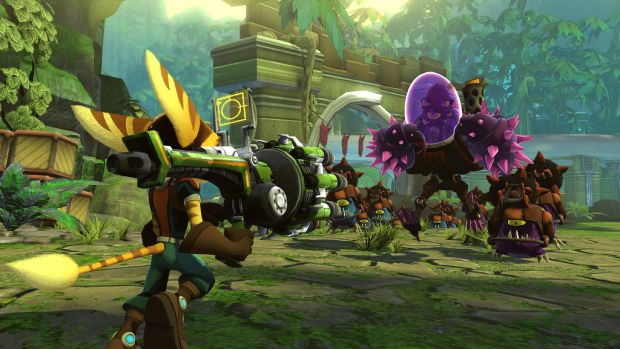 Insomniac Games Senior Community Manager, James Stevenson, dropped by the PlayStation Blog to give out some new details on Ratchet & Clank: Full Frontal Assault. Good news! According to James we can expect the “classic camera, weapons and third-person Ratchet gameplay that the series is known for.”

New to Full Front Assault is the addition of a “tower defense element that will have you building and defending a base against invasions.” Don’t freak the f*ck out at the Tower Defense bit though, as James later added that it’s a “tower defense twist – not a full on [tower defense] game.”

Other new bits of info shared by James includes two player online or local co-op between Ratchet, Clank, or Captain Qwark. There will also be five levels, set on three different planets. Finally, James teased a new multiplayer mode that they aren’t talking about still, but he did at least drop some of the first screenshots for the game.

Full Frontal Assault will be out on the PlayStation Network this Fall, and don’t forget that the Ratchet & Clank Collection is out on August 28 too.

Filed under... #Insomniac Games#PSN#Ratchet and Clank